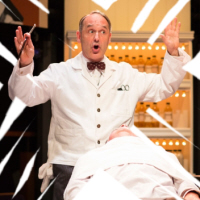 I'd always thought of Somerset Maugham as a novelist and short story writer who'd also written the odd play, but it turns out in the early part of his career he was quite a prolific and successful playwright. He did give up the theatre for the last three decades of his life though, and 1933's Sheppey was his final play. It's a satirical, political comedy on issues that are sadly timeless, and starts in a barber's shop where Sheppey (John Ramm) is assistant to Mr Bradley (Geff Francis.) His sense of humour makes him popular with the customers and his ability to sell Bradley's various potions to pretty much anyone is legendary. He's always said he was born lucky and it's proven when he wins the £8,500 jackpot in the sweepstakes. But this financial fortune comes at the same time as a health scare, and when he recovers from what might have been a mini-stroke, he's significantly changed his mind about what to do with the money.

Never having been a religious man, he's recently testified in a court case and been horrified by the condition of the poor he saw there; he decides to help them according to very literal Christian values. 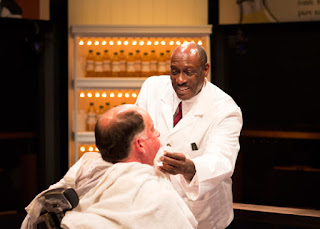 The opening act in the barber's shop has already introduced us to the easy way people dismiss the plight of those less fortunate, and Sheppey's family are appalled to find they won't be getting the share of the money they were expecting. More so when he opens his house to the needy, like prostitute Bessie (Dickie Beau) and thief Cooper (Tom Peters.) Maugham's play has some pretty harsh things to say about people's attitudes, but he says them in a funny way, particularly through a deeply selfish couple in Sheppey's daughter Florrie (Katie Moore) and her fiancé Ernie (Josh Dylan,) an aspiring politician (he might want to go a bit further afield from this theatre if he wants to run for Parliamanent; Richmond doesn't seem to be in the market for a blond right-winger at the moment.) 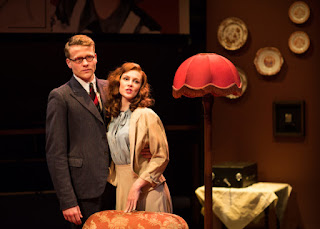 The play's got a good supply of memorably snappy lines on the themes of religion, morality and hypocrisy:
"We need theologians to explain that whatever Jesus said, he didn't really mean it."
"He's a very moral man, which is why he sees the worst in everyone."
"What are you doing?" "Praying." "NOT IN THE SITTING ROOM!" 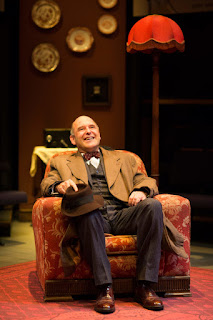 But rather than the sharp satire, Paul Miller's production makes its point with warmth, in Ramm's unfailingly decent Sheppey, who's such a good person everyone else tried to get him committed to an asylum. There's another gentle voice of decency in his baffled but quietly supportive wife (Sarah Ball,) and Simon Daw's designs weave phrenology charts into the set in a nod to the quacks who'll be happy to diagnose Sheppey's selfnessness as mental illness. A last dip into the surreal feels a bit out of place* but this is a worthy rediscovery and a likeable production of a play whose harsh point is made with a surprising amount of heart.

Sheppey by Somerset Maugham is booking until the 7th of January at the Orange Tree Theatre.

*and I think Miller might have got Death and Desire of the Endless mixed up
Posted by nick730 at 18:46