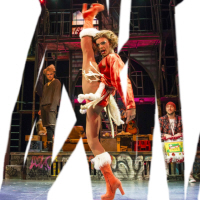 I have my own theories as to why one of Broadway's biggest-ever hits only ever had modest success in the UK, and although I've seen Rent twice before, this is the first time I've seen what could be called a "straightforward" production in this country: I saw the notorious Rent Remixed, which must still serve as the gold standard of "so bad it's good," and the one time I have seen it played straight was the 2011 off-Broadway revival, in which the audience could be described as... very much what you might imagine an American audience to be. So it's interesting to see this 20th anniversary touring production played more or less as written to a British crowd, although clearly one made up largely of established fans. Technically an adaptation of the Puccini opera La Bohème, Jonathan Larson's rock musical is an ensemble piece set in New York's "alphabet city" in the mid-nineties, with the AIDS crisis still in full swing.

Narrator and wannabe documentary filmmaker Mark (Billy Cullum) shares an apartment with HIV-positive recovering junkie Roger (Ross Hunter,) who on Christmas Eve gets a visit from still-very-much-a-junkie Mimi (Philippa Stefani) and falls for her instantly. 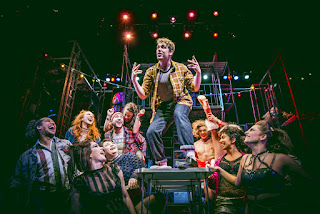 The same night their friend Tom Collins (Ryan O'Gorman) is mugged, then found and saved by drag queen* Angel (Layton Williams) and they also start a relationship; while Mark himself remains obsessed with his ex Maureen (Lucie Jones,) who left him for another woman, the uptight Joanne (Shanay Holmes.) The first act revolves around their landlord'as attempts to evict the homeless from a neighbouring vacant lot, and a protest arranged by Maureen (The face of an angel! The body of a dancer! The name of a dinnerlady!) against the eviction; the second act follows the characters over the next year. 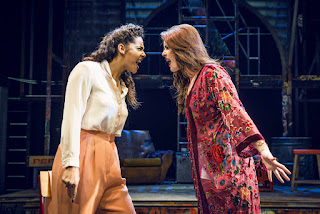 I like a lot of the songs in Rent, especially "Take Me or Leave Me" and "What You Own," which is what keeps me coming back to the show, but I also find it painfully earnest, which I think accounts for why it's only ever found a small - but clearly enthusiastic - fandom in this country. Director Bruce Guthrie has for the most part stuck to Larson's po-faced intentions; when Mimi has a near-death experience and sees Angel at the end of the tunnel of white light telling her to go back, it would take a heart of stone not to laugh. But without going all-out on the bizarre campery of the remix, he's still found some of the elements that are a bit arch: I've never been completely sure if the show itself realises that Maureen (Teller of Tales! Breaker of Hearts! Part-time nit-nurse!) is actually a terrible performance artist, but Guthrie's production certainly does. 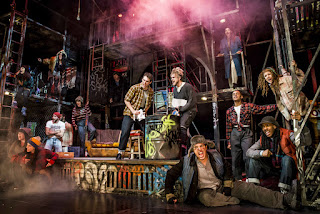 The cast is for the most part decent with a couple of standouts - "Today 4 U" becomes a showcase for Williams' ridiculously limber dancing, full of high-kicks, splits and flips - it got a huge ovation and a tiny little girl$ in the second row looked stunned and thrilled. There's a good ensemble supporting the main cast, in which Jenny O'Leary and Jordan Laviniere stand out taking on multiple characters. And either Guthrie has gone back to the original arrangement or I was imagining the extent to which "Seasons of Love" got overused in the other revivals I saw: It crops up four times here, only in the second act, which is more than enough and serves its purpose as a measure of time passing. This isn't a production to change my opinion of Rent - catchy songs, often painfully over-sincere story - but a very strong and entertaining one.

Rent by Jonathan Larson is booking until the 28th of January at the St James Theatre; then continuing on tour to Eastbourne, Bromley, Edinburgh, Liverpool, Woking, Leicester, Cardiff, Cheltenham, York, Poole, Coventry, Nottingham and Tunbridge Wells.

*it struck me that if this was written today, Angel probably wouldn't have been described so casually as a drag queen, as his gender identity comes across a bit more complex than that

$look, I'm not here to tell you what shows you should take your child to, but when she's going "can I have some motherfucking juice please Mummy?" there'll be no point doing *face of surprise*
Posted by nick730 at 23:22