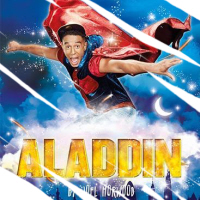 For the fifth year running it was a big group outing to the Lyric Hammersmith's pantomime, where last year's director Ellen McDougall and set designer Oliver Townsend are back, as is Cinderella's Prince Charming Karl Queensborough in the title role of Aladdin. It's all change elsewhere though, most notably in the script where, after three years, Tom Wells has left (probably because he had two new plays of his own this year to worry about) and former co-writer Joel Horwood has returned without his writing partner Morgan Lloyd Malcolm. Panto of course always has a bit of a topical edge and so here the story's introduced by the villain - Nigel David Donald Theresa Boris Abanazer (Vikki Stone,) who lives in Fulhammerboosh, where the rich have all the power and the poor are vilified.

Abanazer discovers that the only person who can get him the wealth he needs to marry the Princess Jasmine (Allyson Ava-Brown) is Aladdin, who's currently wanted by the Emperor (Dale Rapley) for breaking the law against commoners looking at the Princess. 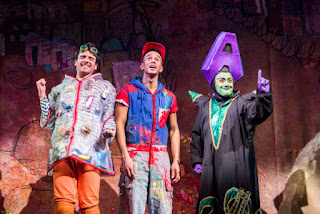 Stone is a very entertaining villain with a truly bizarre "A"-shaped hat courtesy of costume designer Jean Chan, while James Doherty is a suitably flirty Widow Twankey and Malinda Parris an energetic and loveable Genie. The enthusiastic Queensborough does get sidelined though in favour of Arthur McBain's rather irritating Wishy Washy - in fact Wishy Washy is foregrounded so much that his is the only call-and-response that's actually followed through with (constantly.) I could see Phill trying to do Widow Twankey's call-and-response and being met with nothing every time. 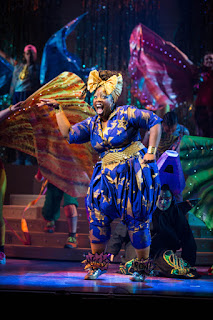 For a script that's presumably been in preparation for over a year (weirdly, this year's panto was put on sale while last year's was still running,) there's a few such instances of things being by-the-numbers: I knew we weren't in for a classic "messy scene" when they didn't even need to put down plastic sheeting. But most of all what I missed was the panto trademark of absolutely filthy jokes snuck into a kids' show - which is after all why adults go to panto even without kids. Late in the day, Horwood comes up with "we were in the dark and had a little rub, and magic happened!" which is when I realised that Wells would have come up with half a dozen of those by that point - compared to this, his gags weren't so much near-the-knuckle as up-to-the-wrist. 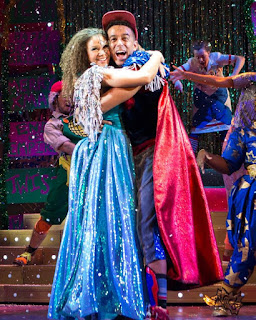 Maybe Morgan Lloyd Malcolm was doing a lot of the heavy lifting in that regard because I don't remember thinking that of their original Cinderella. There's still a lot to enjoy, largely in the performances, and this remains clearly great fun for the kids, but the inter-generational appeal is a bit muted this year.

Aladdin by Joel Horwood is booking until the 7th of January at the Lyric Hammersmith.