Theatre review: She Loves Me 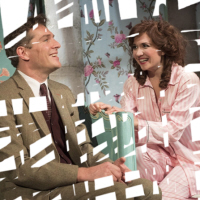 I started 2016 with a musical about a rather niche subject; I end the year on a more old-fashioned one that isn't strictly speaking formulaic - it became the formula for several Hollywood Rom-Coms. She Loves Me has a book by Joe Masteroff, music by Jerry Bock and lyrics by Sheldon Harnick, and takes its story from Hungarian play Parfumerie, about hate turning to love in the titular shop. Georg (Mark Umbers) is the perennially single deputy store manager who's resorted to a lonely hearts column, and has fallen for a woman he's been exchanging letters with. When one of the shop clerks leaves, her replacement Amalia (Scarlett Strallen) instantly annoys him by selling a music box he'd bet would be unsellable, and their relationship is fractious from then on. Needless to say, Amalia is actually the "Dear Friend" he's been writing to, and she feels the same way about his letters.

The story is largely a series of problems that get in the way of them actually going on their overdue blind date and realising the person they love is the colleague they think they hate. 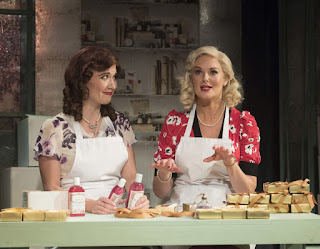 Many of these problems come when parfumerie owner Mr Maraczek (understudy Vincent Pirillo) suddenly starts treating Georg in a surprisingly hostile way. Unsurprisingly for a Menier Christmas show, Matthew White's production is sweetly old-fashioned with a typically elaborate set (four small revolves) from Paul Farnsworth. There's good performances from Umbers and Strallen, as well as their supporting cast, with Katherine Kingsley on belting comic form as Ilona, who's being messed around by her colleague Steven (Dominic Tighe,) Georg getting a nervous sidekick in Ladislav (Alastair Brookshaw,) while the puppyish Arpad (Callum Howells) angles for a promotion from delivery boy to the shop floor. 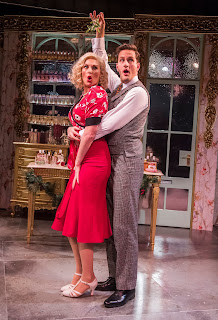 While there's inevitably some of the dubious sexual politics of classic American musicals (it did irritate me that Georg finds out the secret halfway through and spends the whole second act using it to trick Amalia, and this is apparently romantic and fine,) there's much worse examples out there. Weirder for an early 1960s hit musical She Loves Me is completely lacking in showstoppers - not one song from it has become a standard, they're all functional and pleasant enough but no sign of an eleven o'clock number. Still, in among the saccharine the show can sometimes surprise you - I did like how Amalia's sadness at the end of the first act was undercut by the Waiter (Cory English) singing a song that basically twists the knife in.

She Loves Me by Joe Masteroff, Jerry Bock and Sheldon Harnick, based on Parfumerie by Miklós László, is booking until the 4th of March at the Menier Chocolate Factory.