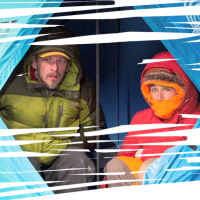 It seems like "whimsy" is the word of the week - a couple of days ago it was a particularly Welsh brand of it, now it's an American version brought to life by Mark Rylance, himself very much an English eccentric (in fact this play only makes me find more plausibility in Weez' theory that Rylance isn't actually an actor, but a collection of small woodland creatures standing on each other's shoulders in a coat,) who actually grew up in America. Nice Fish is by US writer Louis Jenkins, whose poems Rylance has a habit of reading out in lieu of acceptance speeches for his many awards, and it definitely feels like what it is: A collection of existing writings strung together, rather than a narrative. Erik (Jim Lichtscheidl) has gone out onto a frozen Minnesota lake to fish through the ice, and brought with him Ron (Rylance,) who'll be keeping him company but has no interest in fishing himself.

The two men occasionally interact but largely they soliloquise, Claire van Kampen's production giving us blackouts between their alternate musings, resetting each time to a fresh train of thought. 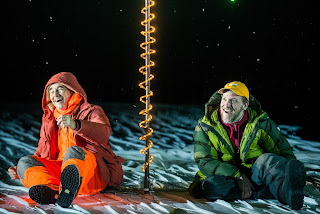 We also get speeches from a couple of other characters; a policeman (Bob Davis) tries to rip them off with an endless list of fishing licences they need, Flo (Kayli Carter) invites them to use her sauna and her grandfather (Raye Birk) turns up with a spear that's his own preferred fishing method. Todd Rosenthal's set is a further character, a sheet of ice that's occasionally populated by toy trains and puppets, with sofas and props appearing and disappearing in and out of the ice. 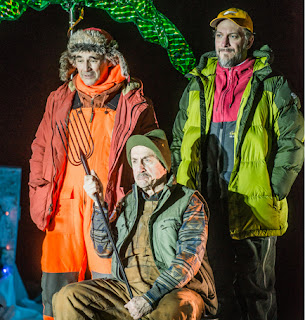 Nice Fish pretty much defies definition or explanation, and when it finally floats off into outright surrealism it feels like it's found the level it's most comfortable in. The individual speeches are often funny and occasionally moving, the 95 minutes go by very quickly despite the measured pace, and Rylance is of course always worth seeing, but beyond his performance there's no obvious reason for the play itself to exist: As it stands it's a quirky and diverting evening but I can't see it being revived in future years without its star.

Nice Fish by Mark Rylance and Louis Jenkins is booking until the 11th of February at the Harold Pinter Theatre.