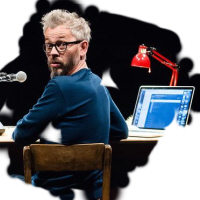 Shôn Dale-Jones is the creator and performer behind "emerging performance artist" Hugh Hughes, but for his latest show The Duke he's making a point of performing as himself. He also runs all the sound effects from a laptop on his desk, something that's practical as he can't afford to pay a sound engineer - the show is, by definition, not going to make any money. This is because the story itself touches on the refugee crisis, and in a more tangible sense the show is an attempt to help in some way: Tickets are free, and instead the audience are asked to make a donation to child refugee charities on the way out. It might be Shôn on stage rather than Hugh but it's still an hour of storytelling, and the starting point is a porcelain figurine of the Duke of Wellington on horseback, bought by his father in 1974 as an investment. Ten years after his father's death, Dale-Jones gets a distraught call from his mother to say she's accidentally broken the Duke while dusting.

At the time he's preoccupied with writing a film version of his show Floating in which the Isle of Anglesey comes loose and floats around the Atlantic; he's meant to be doing extensive rewrites that'll see the project green-lit, but instead ends up on a treasure hunt to try and find a replacement figurine. 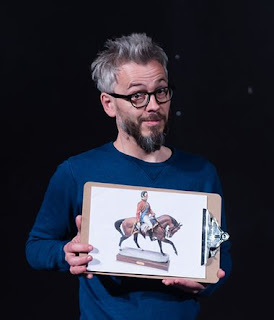 Although not quite on the level of a Hugh Hughes story that would spin off into actual magic, The Duke still goes into the realms of fantasy in a story full of extreme coincidence that enjoys blurring the lines between reality and the way Shôn imagines the story might have gone. The theme of refugees is actually only mentioned a couple of times in the whole show, as overheard news reports mention people drowning in the Mediterranean. They're abrupt intrusions into the story, a reminder that some realities can't or shouldn't be ignored, even as we're off on a strange road trip chasing a porcelain figurine. And the idea of how much people might have paid for a dangerous escape ties into the idea of figuring out the worth of things, as Shôn balances his soul-destroying but lucrative rewrites against wanting to keep his lonely mother happy; and finally the audience are asked to weigh in with what we think the show's worth in our charity donations. It's a bit rough around the edges but The Duke still shows Dale-Jones' characteristic warmth and whimsy even in the face of dark concerns.

The Duke by Shôn Dale-Jones is booking in repertory until the 2nd of December at the Royal Court's Jerwood Theatre Upstairs (returns only) and from the 15th to the 17th of December at The Pit.