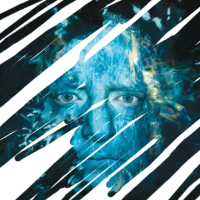 At some point during rehearsals at the RSC the following conversation must surely have taken place:
"You know how we've marketed this production of The Tempest as being especially family-friendly and a good first Shakespeare for younger kids? Well there's a scene coming up that's basically a 25-minute information dump where the whole plot gets described and nothing happens visually. So you know how this production uses some of the most sophisticated projections ever seen on stage? Maybe we could use some of those to illustrate that scene?"
"... Nah."
That's right, I'm getting my usual gripe about Prospero's Basil Exposition speech out of the way early this time, and no, except for one moment Gregory Doran's production doesn't use its theatrical toolbox to make it any less dry.

And it's a considerable toolbox to ignore, as the big selling point of this Tempest is that the company has paired up with Intel and Imaginarium Studios to take projections, already a major part of theatre these days, to the next level by bringing motion capture technology to live performance. 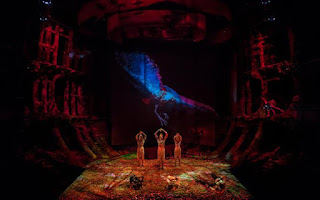 It's rather overshadowed the other coup, which is the return of Simon Russell Beale to the company where he made his name; his last appearance in Stratford-upon-Avon was in another production of The Tempest - I think it was the first I ever saw* - in which he played Ariel. 20 years later he's back to play Prospero, the former Duke of Milan who was overthrown by his brother Antonio (Oscar Pearce,) who's actually willing to do the job properly (Prospero and Lear, eh? Both men who really like everything about being ruler except for the actual, you know, ruling.) 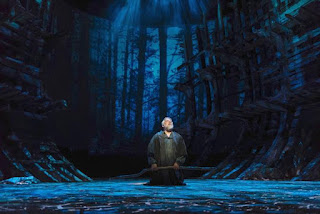 He washed up on a remote island with his daughter Miranda, where he used his rudimentary magic knowledge to enslave the local magical creatures and use them to control the island. Now a ship carrying all his former enemies sails nearby, and he conjures a magical storm to shipwreck them, then manipulates them until he gets his dukedom back, and an advantageous marriage for his daughter into the bargain.

Shakespeare included a wedding masque in the play, presumably to capitalise on their popularity at the time and the new staging techniques they'd introduced, and that was apparently the starting point for Doran wanting to use technology. Somewhere along the way the focus shifted from the masque to Prospero's spirit servant Ariel, whom Mark Quartley plays in a motion capture suit that allows him to control some of the CGI, specifically the various creatures Ariel transforms himself into. 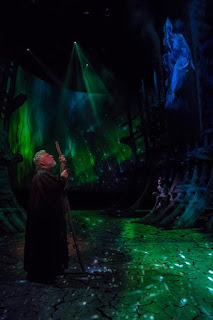 The RST is an unlikely stage to experiment with this kind of work due to its extreme thrust; Stephen Brimson Lewis' design takes some of the seating away from the far edges, making the skeleton of a wrecked ship the backdrop; a tube of fabric descends sometimes that allows the projections to be seen from various angles in the auditorium. It's most effectively used in a reenactment of Ariel's imprisonment in a tree (that one instance where it's used in the Basil Exposition scene.) The CGI designs aren't of movie quality of course but they're not bad; the one big thing they can't seem to do is get the mouth to move in time with the speech, which is actually a bit of a big deal, because it means there's no obvious advantage to doing it live. 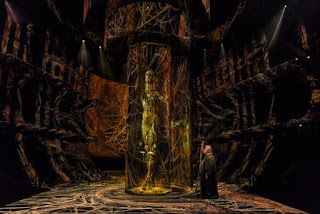 In fact the tech makes up far less of the show than I'd expected; I could have sworn it was originally announced that Ariel would be entirely holographic. Maybe I remember it wrong, or maybe the production had to tone things down to a more achievable level. In the end this doesn't feel that much more projection-heavy than many other shows. Still, if the end result is Mark Quartley spending more time on stage in a skintight motion capture suit I'm not complaining. 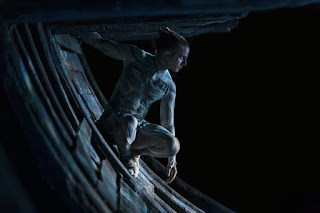 I heard SRB on a radio panel earlier this year where it sounded as if he was of the school that sees Prospero as a bad ruler who deserved to be ousted (the man literally admits to valuing his books above his dukedom, then wonders why people didn't want him in charge of the latter) so I didn't expect a particularly sympathetic portrayal of the character. And indeed, especially early on, he gives us Arsehole Prospero, always violently angry at people who least deserve it. But it's not always a consistent portrayal - the impression I got was that Prospero might be in control of events on the island but he's not always in control of himself and his emotions (again, would you really want a man like that in charge of a major pow...oh, shit.) 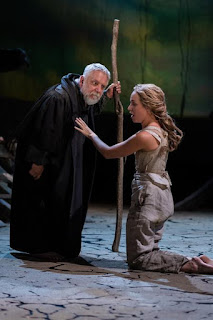 As is often the case, the character's nastiest side is seen in his relationship with Ariel. (As I've probably mentioned before, he is constantly telling Ariel he'll free him as reward for whatever job he's just successfully done, which is (a) literally the least he can do and (b) something he's already sworn to do anyway so repeatedly bringing it up as a sign of his own munificence is a massive dick move.) Back in Sam Mendes' production, SRB's own Ariel famously spat in Prospero's face as soon as he got his own free will back (though this was changed by the time I saw it in London.) Here if anything their parting is even more brutal, on Prospero's side: Ariel does want his freedom but he also genuinely wants his master's love. But as soon as the spirit is no longer of use to him, the magician loses all interest in him and Ariel is left to wander off alone. 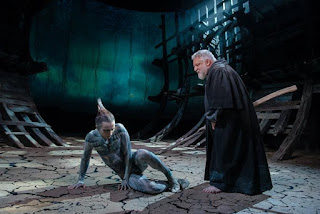 Theatre may still be a long way from gender parity but you can see how much effort most productions have been putting into it, by the fact that I really noticed, and found weird, a Tempest where, outside of the masque, there's only one female character. And Miranda's hardly one of Shakespeare's better female characters anyway, but the casting of Jenny Rainsford was promising, and she does deliver: She's got a bit more life in her than we usually see, even talking back to her aggressive father, and she and Daniel Easton do manage to bring some personality to her and the even-duller Ferdinand - in part thanks to one of the oldest visual gags in the book, that's as much fun to anticipate as it is when it eventually pays off.

Elsewhere Joe Dixon joins the list of highly likeable Calibans, even, despite discovering a love of booze, coming across as much smarter than the two humans he initially worships. Yet he's also a particularly monstrous-looking one, a hunchback whose spine is outside his skin. And in a play whose inclusion among the comedies can sometimes feel pretty dubious, there's a decent amount of funny scenes: Tony Jayawardena's a very good Stephano, and even the scene about whether Gonzalo (Joseph Mydell) or Adrian (Oliver Towse) will turn out to be the biggest windbag, usually a gag that barely registers, works as a comic setpiece. 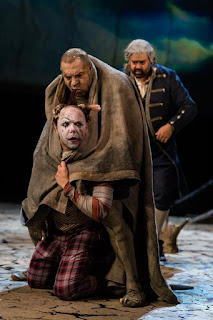 So this is a decent Tempest and in some aspects a particularly good one, although not necessarily in its attention-grabbing staging. From my seat in the Upper Circle above the vom I could see well, but I bumped into Séan and Eirn afterwards, and they said though their side seats weren't particularly cheap there was still a lot of projection work they missed. I think this will work much better when it transfers to the Barbican's proscenium arch next summer. Usually a long gap before a transfer is down to actor availability, but I wonder in this instance if they also want time to fine-tune the technology and completely restage it for a different auditorium.

The Tempest by William Shakespeare is booking until the 21st of January at the Royal Shakespeare Theatre, Stratford-upon-Avon; then from the 30th of June to the 18th of August at the Barbican Theatre.

*continuing a bit of a running theme in recent years, in which I see SRB return to plays I saw him in when I first started going to the theatre, to play an older character - there's also been Hamlet and King Lear
Posted by nick730 at 22:01