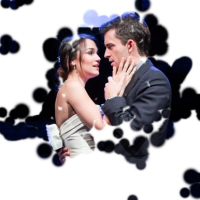 While America was voting to royally fuck up the next four years, I was watching The Last Five Years, a show I'd long been aware of but never got round to seeing until now. Jason Robert Brown's musical follows a fairly straightforward story of a relationship that doesn't quite stand the test of time: Jamie (Jonathan Bailey) is an aspiring writer, Cathy (Samantha Barks) an aspiring actress, and they fall in love soon after graduating from college. His career takes off pretty quickly, with a book deal and reading tours around the US, but her acting career never really matches it - a rep season in Ohio that she takes as a stopgap looks like it's as good as it's ever going to get for her. Cathy gets frustrated and bitter, Jamie cheats on her, and their marriage disintegrates. The twist is that we hardly ever see the two characters interact because their story is being told from different directions: We meet Jamie in the first flush of love, laughing at the fact that he's met his perfect girl, if only she was Jewish.

But Cathy opens the show finding the letter from her husband telling her he's leaving her: As he goes through their relationship in chronological order, her side of the story is told in reverse, leading up to their first meeting. 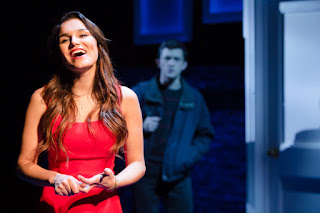 The show's composer has also directed this revival at the soon-to-be-renamed St James Theatre, in a rather literal staging that keeps threatening to trip the production up: Derek McLane's set has doors, seating, tables, beds, a pier and at one point even a rowing boat sliding on and off the stage with each song, awkwardly and always looking like something's about to get jammed. There's a similarly workmanlike quality to Brown's storytelling, which is unfortunate given the high concept: Presumably Jan had read the blurb before agreeing to come with me to the show, but he'd forgotten the premise by the time we saw it, and completely failed to realise Cathy's story was playing out backwards (yes, he found her side of the story quite confusing.) 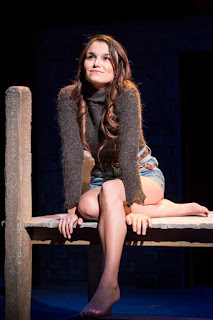 The musical itself, on the other hand, still comes off well - Brown's songs are catchy and enjoyable, with the opposing timelines meaning we get a good mix of the lighter moments with the more heartbroken songs. Barks and Bailey are strong both vocally and have the stage presence necessary to hold an audience while playing what is mostly a solo show - it's only at the exact middle point, which happens to be the proposal and wedding, that they actually share the same scene. Barks is more established in musical theatre and it shows in vocals that make the hard notes look effortless; Bailey is also good with some unexpectedly belting notes, but struggles a bit with the high notes and seems to be holding back early on for the sake of later big moments. 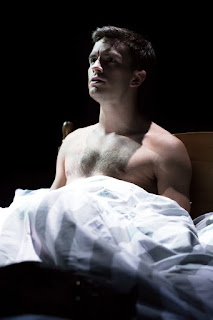 I also could have done without him gurning quite so much early on to get laughs - he improves as he relaxes into the role and while his character is the one who's more obviously betrayed the marriage he makes Jamie as sympathetic as can be expected. The Last Five Years doesn't really pack the emotional punch you'd expect from it; having the central couple barely interact can't help, but neither does a pretty steadfastly literal production. But the songs and the way the actors sell them are the stars here, meaning for the most part the faults can be overlooked in an entertaining evening. And any show that involves me sitting a foot away from Jonny Bailey in just his boxers is never going to be a loss anyway.

The Last Five Years by Jason Robert Brown is booking until the 3rd of December at the St James Theatre.