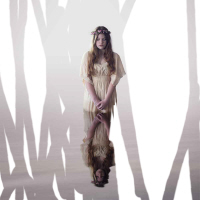 Not a 1970s movie made up largely of stock footage from Seaworld, this Orca is the latest Papatango winner, a playwrighting award that seems to have a weakness for scripts with a dark fantasy or sci-fi touch. But Matt Grinter's play only features the supernatural as part of its mythology, the actual immediate threat is all too inevitably human. The setting is a remote Scottish island, the time could be almost any part of the last hundred years, and the atmosphere is one of determined isolation: Fishing is naturally the main occupation, but while the boats go out to sea every day, it's very unusual for anyone to visit one of the neighbouring islands, let alone the mainland. Orca pods have been spotted in the ocean over the centuries, and are blamed for scaring off the fish whenever times are bad; the islanders have created a mythology and an associated annual ritual to protect their catch.

Every year a Daughter is selected from the teenage girls of the village, and taken out to sea to confront the orcas. Fan (Carla Langley) hopes to be chosen for the honour this year. 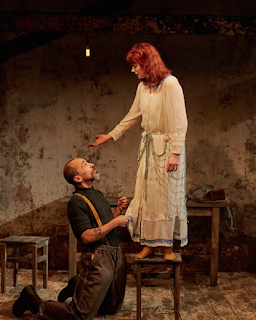 It seems unlikely though because her family are unpopular with the islanders, thanks to her elder sister Maggie (Rona Morison.) Maggie was the Daughter two years earlier, but the event profoundly changed her, and she's been spreading stories nobody's willing to believe. Maybe I'm just seeing Trump analogies in everything at the moment but Grinter's play seems horribly well-timed as a fable of a powerful man, village leader The Father (Aden Gillett,) aggressively enforcing isolationism and crushing any threat to the patriarchy by treating young women as disposable sex objects. 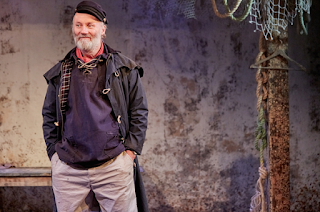 Gillett makes only a handful of brief appearances but they're full of menace under bland words, and Maggie and Fan's father Joshua (Simon Gregor) is too frightened for his livelihood to believe his daughter, despite the fact that another former Daughter, Gretchen (Ellie Turner,) is also behaving suspiciously. Atmosphere is the strongest point of Alice Hamilton's production, Frankie Bradshaw's designs of a moss-covered pier that dominates the room, and costumes that seem timeless, adding a feel of eerie danger. 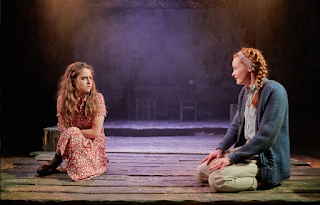 Where Orca struggles is in a story built around the slow reveal of what happened - which is obvious from the start, in fact if you think you can tell what the twist is from the very brief plot description on the website, you're right. It's a shame because Grinter's very good at dialogue that creates a sense of menace, and Hamilton's production is moody with a steely performance from Morison, so given some actual mystery and some tighter plotting we could have had a really unnervingly tense evening; as it is the predictability means the measured pace dips into dull patches.

Orca by Matt Grinter is booking until the 26th of November at Southwark Playhouse's Little Theatre.