Theatre review: I Call My Brothers 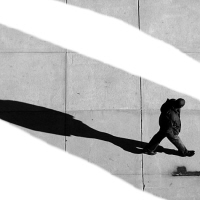 Once again theatre feels like the medium responding the fastest to worrying trends around the world, with a Swedish play touching on the rise of a far-right party to power in that country, but more so on the way this sentiment trickles down to the man on the street. In Jonas Hassen Khemiri's I Call My Brothers, that man is Amor (Richard Sumitro,) an Asian man in his twenties who's out clubbing on a Saturday night when a car bomb, soon to be attributed to an Islamic terrorist, goes off in downtown Stockholm. We follow Amor over the next 24 hours as he goes into town to do chores, chatting to friends and family members on the phone. The more the day goes on the more he feels targeted and under suspicion by the police and the public, but whether he's really being looked at differently or is imagining it might be up for debate.

Three actors play all the other characters he meets over the course of the day, starting with Jonas Khan as an overbearing but lovable childhood friend, and Lanna Joffrey as an insufferable cousin who's converted to Buddhism and is now full of trite words of wisdom. 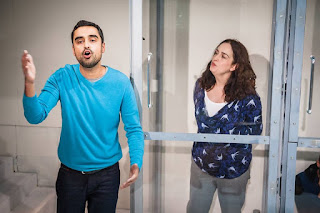 But it's Sumitro who has to hold the show together, and does so with a likeable but complex character: Amor seems to have some mild behavioural difficulties, having grown up fixated on chemistry and only really being able to relate to others by equating them to chemical elements. His awkwardness is endearing but carries hints of being able to go to a dark place - we hear he got so obsessed with a girl he grew up with (Nadia Albina) that she had to leave town, although she remains in touch with him. 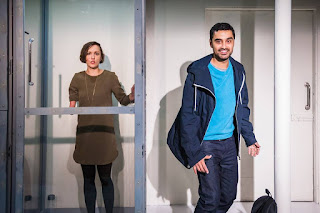 Khemiri has come up with a great character to build his story around, as we get into Amor's head and see how paranoia breaks him down - his desperation not to act suspiciously of course only makes him act more suspiciously, and, ironically, as his nerves crack he could actually become dangerous for real. The title comes from a cleverly ambiguous refrain as Amor describes making a phone call - calling his actual younger brothers to tell them how to go through their day inconspicuously and avoid racist attention; a speech that, out of context, could also be interpreted as a terrorist mastermind giving his cell instructions on how to blend in with the crowd in preparation for an attack. It makes the audience complicit in the hostile crowd Amor believes he's surrounded by. 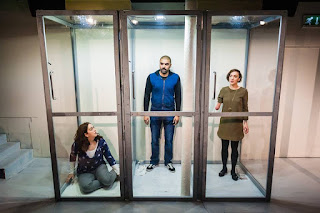 Khemiri's regular translator Rachel Willson-Broyles is American, which shows in some of the turns of phrase which occasionally jar with the accents of the cast; and there's something a little bit awkward about Tinuke Craig's production, largely down to Sadeysa Greenaway-Bailey's set design, which stumbles on the challenges of the Gate's difficult shape and ends up with a very wide, shallow set that leaves the audience turning their heads like a Wimbledon crowd. (It's also uncomfortable or, as the website puts it, "exciting and radical" - my advice would be, make a beeline for the second row, it's the only one that's padded, while the back row is standing only, for no particular reason I could discern.*) 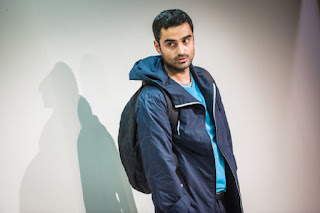 Still, the niggles are minor compared to the positives, the author's come up with a simple, often very funny and eventually quietly devastating idea and Sumitro is an appealing lead to bring it to life. In a play about snap judgements based on race it's interesting to think that at first glance Christopher Haydon doesn't look like the kind of artistic director who'd consistently deliver not only hugely diverse international stories but some of the best ones we've seen in recent years; he'll definitely be a loss when he leaves the Gate next year.

I Call My Brothers by Jonas Hassen Khemiri in a version by Rachel Willson-Broyles is booking until the 3rd of December at the Gate Theatre.

*I'm going to take a wild guess the actors were meant to run through this standing back row at some point, but that it got cut in rehearsals or previews
Posted by nick730 at 22:05