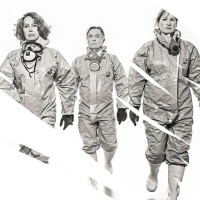 After the large-cast, continent-hopping Chimerica, Lucy Kirkwood scales things down to a story about three retired nuclear scientists, in a single scene that plays out in real time. But looked at another way The Children is Kirkwood's take on a disaster movie - albeit a look at the behind-the-scenes emotional devastation behind the explosions. There have been explosions - in an event literally described as The Disaster, a freak earthquake off the English coast caused a tsunami that hit a nuclear power station, triggering a meltdown. Hazel (Deborah Findlay) and Robin (Ron Cook) met while they were both working at the nuclear plant, and even after their retirement they stayed in their home nearby. Their house is now in the quarantined exclusion zone, and while work goes on to make the plant safe again, they've moved to a small holiday cottage further down the coast. This is where Hazel is surprised by a visit from their former colleague and friend Rose (Francesca Annis.)

Rose moved to America 38 years earlier, and that's the last time she saw Hazel - although she might have seen Robin, who used to go out with her before he met his wife, more recently than that. 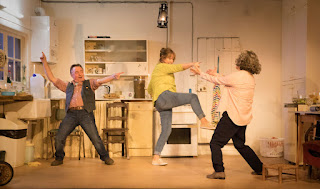 Miriam Buether's set follows a couple of recent trends we've seen at the Royal Court Downstairs, of a starkly cinematic letterbox, as well as a disconcerting angle - I was quite relieved when the story called for a water pipe to leak, proving that the floor was at a slight angle and my eyes weren't playing tricks on me. Add the fact that, due to the need to conserve energy, the late afternoon scene takes place during a scheduled blackout, and there's an eerie tone from the start of James Macdonald's production. As the curtain goes up, Annis stands centre stage looking confused with blood flowing out of her nose. 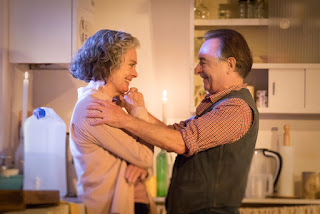 The ominous opening is soon turned on its head though as it turns out that Rose surprised Hazel who punched her (she was particularly surprised as she'd heard Rose was dead.) This thread of dark humour runs throughout the play, undercutting its ominous tone. Although its first half in which the characters, the two women in particular, make pleasantries while failing to hide the tensions that haven't faded over the decades, is tight and intriguing, The Children only really starts to come together in its second hour as Rose reveals the real reason she's turned up after all this time, and a huge sacrifice she's asking her old friends to make. 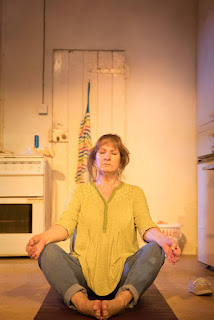 Although Kirkwood's making points that are literally about nuclear power, there's also parts of her script that are clearly a much wider metaphor that ties The Children in with Mike Bartlett's Love, Love, Love and its criticism of the Baby Boomers. Kirkwood offers a bit more chance for redemption for the generation, although Hazel in particular represents a selfish attitude: With her yoga and healthy eating she strangely reminded me of a version of Rob Lowe's character from Parks and Recreation but not played for laughs: Some part of her still believes mortality won't quite apply to her, so the sacrifice she's being asked to make for her children and grandchildren's generations seems even greater than it actually is. It's uneven and takes too long to get to the point but The Children does provide some interesting and worrying food for thought.

The Children by Lucy Kirkwood is booking until the 14th of January at the Royal Court's Jerwood Theatre Downstairs.