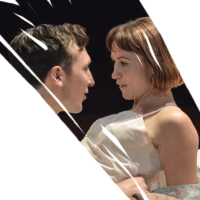 He's still considered something of a big-hitter after the success of One Man, Two Guvnors, but Richard Bean's more recent plays have tended towards the disappointing, so a step back to something a bit more low-key and intimate could be a good move. And so it proves as Kiss Me is a two-hander running just over an hour, and premieres at Hampstead's Downstairs studio space. A romantic comedy-drama with a period setting but some unexpectedly modern attitudes, it takes place a few years after the First World War, which has left women all over Britain widowed, or with husbands so badly injured they can't father children. Enter the unseen and mysterious Dr Trollope, who finds desperate women and offers them an extreme solution: With fertility treatment still in its infancy, she can arrange for a visit from a particularly potent young man to make a baby the old-fashioned way.

"Stephanie"/Jean (Claire Lams) is one such widow, but when "Dennis"/Billy (Ben Lloyd-Hughes) arrives and lists Dr Trollope's rules for keeping things professional - no real names, no personal details, definitely no kissing on the lips - she has trouble being so impersonal. 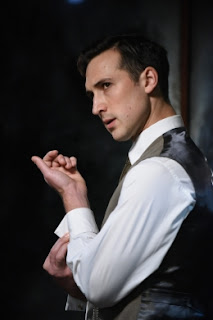 The promised sex doesn't happen, but leaving his tie-pin behind is a handy excuse for Billy to return and, against his better judgement, get into the more meaningful relationship that Jean wants from him. This is an interesting and unusual setup for a play - based on an apocryphal story but one I don't actually find hard to imagine having some truth in it - and although I don't think it's a completely obscure fact that some people dealt with the carnage of the War with a more open sexuality than we associate with the time, it's not something I've often seen explored. At the same time the world still has a prim and proper façade to keep up, and Jean has to balance her desire for a child with the way people will react to a single mother. 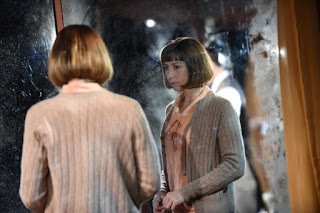 So Bean's already onto a winner with the subject matter and, contrary to what might be expected of him, manages to keep things subtle - Jean's talk can be surprisingly blunt and sexual but she always seems to be taking herself a little bit by surprise. Anna Ledwich gives the play a suitably simple production in which Lams is a real find, very funny and instantly endearing; Lloyd-Hughes contrasts as the more aloof Billy, who still has a genuine emotional connection but is holding something back. Georgia Lowe's traverse set uses mirrors to make the small space look bigger, then covers them up to bring intimacy to the story as it moves towards something bittersweet. A real change of pace from Bean and a very appealing result.

Kiss Me by Richard Bean is booking until the 3rd of December at Hampstead Theatre Downstairs.