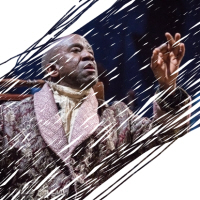 Michael Longhurst makes his Olivier debut in epic fashion with a revival of Peter Shaffer's Amadeus, which takes its title from the middle name of Wolfgang Amadeus Mozart - the middle name because that's the one that means "love of god," and it's a twist on that that causes the obsession at the heart of the play. Antonio Salieri (Lucian Msamati) is a star composer in 18th century Vienna, court composer to Emperor Joseph II (Tom Edden) and with much of the aristocracy as students. His choice of career comes from his religious faith, having prayed to be able to express the glory of god through his music. When the former child prodigy Mozart (Adam Gillen,) now a fully-fledged performer and composer himself, arrives and becomes flavour of the month, Salieri has a violent reaction to the younger man's talent.

Mozart's flawless work makes Salieri realise the mediocrity of his own, and he makes it his life's work to destroy his rival. But more than his personal dislike, it's a crisis of faith that makes him so angry. 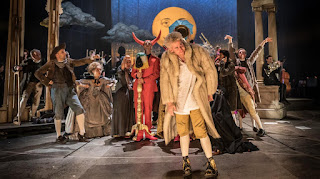 Having lived a fairly ascetic life - his one famous vice being a rather symbolic love of sweets - Salieri feels personally betrayed by god for making Mozart his mouthpiece instead - a libidinous, arrogant waster who acts like an overgrown toddler, but his genius means his music gets set down on the page perfect, whereas it takes Salieri huge effort to create work that'll never match up to it. Longhurst's production successfully sells Salieri's vendetta as something truly dark and spiritual rather than just a case of petty jealousy and, especially once the play has touched on Don Giovanni, has a real sense of Salieri's story being a descent to hell - a theme really brought home by the finale. 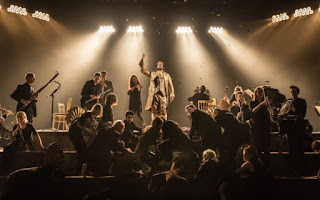 But it's also very convincing as a tragicomedy, right from the opening framing device of a dying Salieri looking back on his life and declaring himself the man who killed Mozart: Having played Iago only last year, Msamati now plays someone a lot less gleeful in his own villainy but every bit as capable of a sardonic one-liner. Mozart is the showier role and Gillen sinks his teeth into the petulant man-child both in his moments of triumph and his eventual despair, while Karla Crome is a good foil as his wife Constanze, funny in her bluntness in the face of the court's pretensions, but with heart in her performance as well. But Msamati barely leaves the stage as Salieri, and he contrasts a silky stillness as the schemer with explosive moments - the first act closes with a speech of utter despair caused by the beauty of his rival's music, which paired with the music itself makes for a breathtaking moment, and not the production's only one. 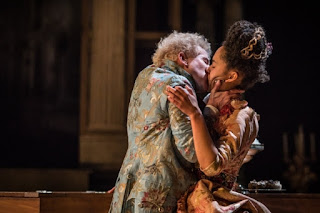 Because the National's resources help put the music both literally and metaphorically at the centre of things. Chloe Lamford's deceptively bare set designs work with Jon Clark's lighting to create shadows that dominate the stage and heighten the oppressive mood, while her period costumes get a punky touch of colourful Doc Martens (although the moments of the whole cast turning up in modern dress and taking selfies feels like a bit of a cursory nod to Rufus Norris' house style rather than an integral part of the production.) But the real extravagance is in putting a 20-piece orchestra on stage - the Southbank Sinfonia return to the Olivier, and this time Longhurst throws the musicians right into the action, sometimes performing upstage but at particularly dramatic moments closing in on the characters. 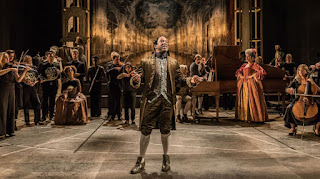 I remember watching the 1984 film adaptation of Amadeus as a child, and remembered enough to have thought it had the potential to be really powerful on its return to the stage, and the National have more than lived up to that. It's dark, moody and oppressive but paradoxically full of vitality and passion - three hours with barely any lulls that send you out wanting to listen to more Mozart.

Amadeus by Peter Shaffer is booking until the 2nd February at the National Theatre's Olivier.