Theatre review: Half a Sixpence 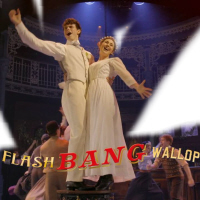 Two big musicals are opening at the same time in London with books by Julian "only living human rich enough to read Shakespeare without his head falling off" Fellowes (and both feature gay stereotypes used for cheap gags, but sure, let's give him another couple of dozen chances before we make any judgements.) Like School of Rock, this is an adaptation of an existing piece, although David Heneker and Beverley Cross' Half a Sixpence is a lot less fresh in the collective memory; in any case we're told Fellowes, along with songwriters Styles and Drewe, have done a very extensive rewrite of the original. Arthur Sixpence Kipps (Charlie Stemp) is a draper's apprentice in Folkestone with a crush on one of the upper-class customers, and Helen (Emma Williams) is charmed by him too. The class difference means they could never pursue a relationship, until Arthur inherits a fortune from the grandfather he never knew.

He's thrust into society with Helen as his guide, but despite their pedigree her family have actually lost their fortune; so her mother (Vivien Parry) pushes for a speedy marriage. Arthur's feelings get confused, though, when his childhood crush Ann (Devon-Elise Johnson) reappears in his life, and he finds himself torn between two women. 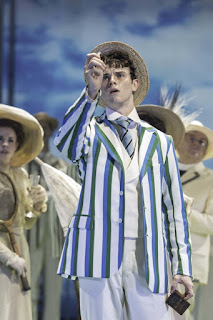 Of course since the show's called Half a Sixpence, and it opens with Arthur cutting a sixpence in half to share as a token with Ann, there's no huge mystery over who he'll pick. Which brings up one of my issues with the show, but first there's a lot of positives: There's no getting over the fact that whether in the original songs or the new ones this is a very old-fashioned show, but it's a great example of one. Sweet, positive and with a number of decent tunes - although once again with one exception it's the originals you're likely to come out humming rather than the new additions. It's built around its setpieces, so the action in between them is quite pedestrian, but the big numbers in Rachel Kavanaugh's production do deliver. 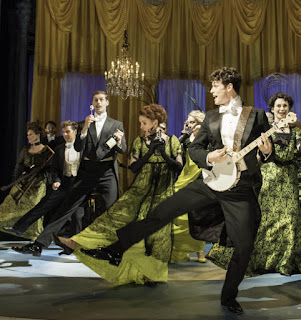 There's a huge amount of pressure on Stemp here; there are no established stars in the production which, for better or worse, is what fills West End houses at the moment, so the publicity has focused firmly on his positive reviews from Chichester. Having only done a couple of chorus roles previously, he auditioned eight times for what he thought was the understudy position, eventually getting the lead itself; the selling point is the chance to see a star-making performance. 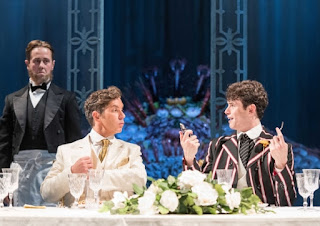 Stemp does live up to his billing with enthusiasm: He's a decent rather than spectacular singer, and while I've heard comments that he only has one facial expression I'd say there were two - as well as the big cheesy grin there's the confused face. (It's still one more than most of the cast get the opportunity to display. Characterisation is... not the show's biggest concern, let's be honest.) Where he really shines is in cheeky-chappie stage presence and explosive dance moves (choreographed by Andrew Wright, whose bio opens by telling us what public school he went to. Is... is that where we are now?) This really is a show heavily dependent on its lead and Stemp successfully and athletically carries it, and it might be the fact that I was sitting in the Upper Circle but he also has a bit of an Eddie Redmayne look to him at times. I'd give his banjo string a twang, is what I'm saying. But he's well supported by Ian Bartholomew as a down-on-his luck actor who helps Arthur claim his inheritance, and among his fellow apprentices Sam O'Rourke stands out as the permanently-hungry Buggins. 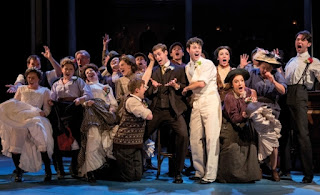 It's always enjoyable but Half a Sixpence's script does have a lot of issues that niggle, especially since we're told it's been extensively overhauled - it's not just Gerard Carey's queeny photographer, or the whiter-than-white cast, that are out of place in the 21st century, but also the attitude to the female characters. It may be clear from the start who we're meant to root for but it's hard when we don't really know much about Ann - the only moment where she gets a chance to have a personality is also the only real sign of a more modern hand in the writing, in a song where she and Flo (Bethany Huckle) sing about their sexual frustration and how they like donkey rides because it gives their flange a tingle* (paraphrasing.) 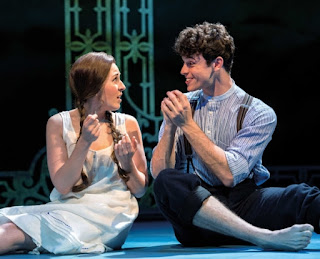 Ann's main claim to be the romantic lead is that she's got dibs on Arthur and, presumably, something about how people should stick to their own kind. We get to know Helen a lot better, and she feels very hard done by. Her family may be gold-diggers but she herself is fond of Arthur before his good fortune, and the only argument against her seems to be that she tries to change him. In practice she only seems to be trying to get him to stop dropping his aitches so he can be himself without being judged‡, and is just as willing to make compromises herself. There's something awkward about a show that makes you root for what is clearly meant to be the "wrong" person, and while I have nothing against Johnson who gives a strong performance, it seems unfair that she gets to share Stemp's curtain call instead of Williams, who's done a lot more over the course of the show. 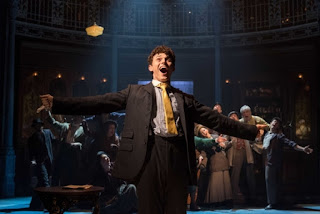 Still, the show is entertaining enough to overcome some problematic politics - which, let's face it, would probably be easier to brush aside if this was the 1961 original, rather than a whole new version of the story that should know better. Given the saturation advertising I would guess the lack of name recognition is proving a problem where shifting tickets is concerned, but if word of mouth gets added to the critical praise hopefully Half a Sixpence will complete its run, as for all its script flaws and lulls in the action, when it comes to life it really comes to life. And hey, if the critics are right about Stemp then you get bragging rights about having seen him before he was famous.

Half a Sixpence by David Heneker, Beverley Cross, Julian Fellowes, George Stiles and Anthony Drewe, based on Kipps: The Story of a Simple Soul by H.G. Wells, is booking until the 11th of February at the Noël Coward Theatre.