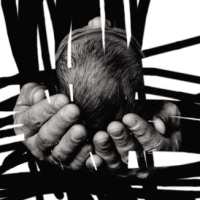 Unusually, all the Young Vic auditoria are in use at the moment, with the mid-sized Maria getting a couple of big-name creatives - Ian Rickson directs an adaptation by Conor McPherson, The Nest. The original is a 1970s environmental fable by Franz Xaver Kroetz, about a couple's attempts to make a home for their new son, regardless of the consequences. Martha (Caoilfhionn Dunne) is heavily pregnant and pretty sure her old job won't still be there for her after she gives birth. So her lorry driver husband Kurt (Laurence Kinlan) is taking as much overtime as he can manage, including a cash-in-hand job to dispose of what he's told is spoiled wine, which he doesn't see fit to question. The consequences end up coming back sooner and in a much more direct way than expected, and the couple are left trying to figure out if their family can survive the damage.

The publicity calls Kroetz' original a "German classic" but I wasn't previously familiar with it, so I don't know to what extent its incredibly restrained pace is part of his version or the adaptation, but it's one of the most notable things about the evening.

In fact nothing remotely out of the ordinary happens until halfway through the story, as the play focuses instead on getting to know the couple in what McPherson has made a likeable, funny story of people who don't earn a huge amount but are determined to make the most of it. It's a tried and tested way to get the audience invested in characters for when things start going wrong for them, and it's effective here because the faith Rickson has in his actors is justified and they carry the play through a slow opening where very little happens. 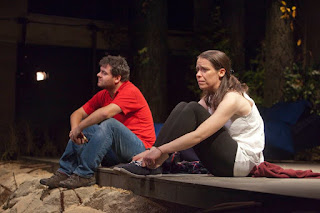 In fact the measured pace remains the most memorable feature of the show, with a middle section that's largely silent as the family seems to be imploding. Alyson Cummins' set is striking from the moment you walk into the room, with rising damp on the white walls and steel construction bars sticking out of the house into the ground and rock around it; the effect is of the human and natural worlds encroaching dangerously on each other, and adds to the general air of menace. Four decades on from when it premiered, the environmental message feels a bit simple and blunt, but McPherson and Rickson have still fashioned something hauntingly atmospheric out of it.

The Nest by Franz Xaver Kroetz in a version by Conor McPherson is booking until the 26th of November at the Young Vic's Maria*.

*I notice this show is getting one of those "babes in arms" performances that are becoming popular lately; doesn't seem like the wisest decision to me, given some of the things that happen they could end up with one highly traumatised audience.
Posted by nick730 at 22:14