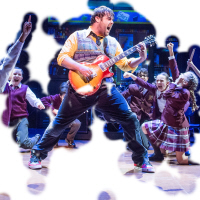 I know it's getting to the point where I'm seeing The Horrors Of This Year in absolutely everything, but you've got to admit there's something very 2016 to a show all about "sticking it to the man" composed by, and making a healthy profit for, the very dictionary definition of The Man. Dr Baron Dame Sir Andrew Lloyd Lord Webber BA (Hons) MEng composes the stage adaptation of the film School of Rock, with lyrics by Glenn Slater and book by Julian "here proles, let me dumb down Shakespeare for you so you don't get drool all over him" Fellowes, just in case the disconnect between subject matter and creative team wasn't surreal enough already. School of Rock is the story of an expensive private school that should be the subject of numerous lawsuits due to its dangerously negligent lack of background checking on potential new staff.

When a teacher goes long term sick, they think they've hired experienced substitute teacher Ned Schneebly (Oliver Jackson,) but in fact the man who turns up is Ned's flatmate Dewey Finn (David Fynn,) a failed rock musician impersonating his friend in a last-ditch attempt to pay his rent. 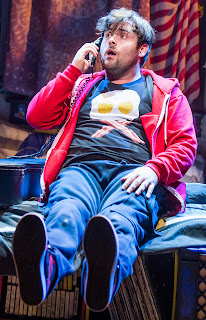 Dewey finds a class full of intellectually astute, but emotionally stunted children who are also talented musicians. He turns their lessons into rehearsals so they can back him in an upcoming Battle of the Bands; of course they also end up learning what sort of people they want to grow up to be, and reconnecting with their distant parents.

Laurence Connor's production opens with a recorded message from Lloyd Webber saying the question he's most often asked is whether the children play their own instruments (really? I'd have thought it was something about his House of Lords voting record.) And yes, while there is an adult band backing the more traditional musical theatre numbers, when the child characters perform their actors really are playing the music. The casting has found a very strong set of young musicians - led tonight by Toby Lee, alternating with Tom Abisgold and Jake Slack as guitarist Zack, and Lois Jenkins, alternating with Selma Hansen and Sophia Pettit as bassist Katie - who are the show's big draw. It does mean much of the young cast don't have the vocals or stage presence of, say, the Matildas, but it still makes for a good showcase of new talent, and there's nothing wrong with focusing on a different talent than the usual singing and dancing. 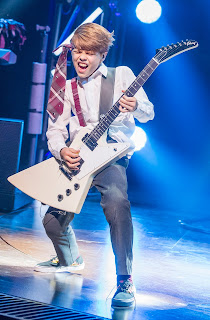 Penny was worried going in that we might get a lead who tried too hard to copy Jack Black's performance in the film, but Fynn's Finn is a distinct character, more awkward and less brash. This year has seen Lloyd Webber's breakthrough hit Jesus Christ Superstar revived with great success, and proving he could once write a different tune for every song, and this latest offering also brings back a more enjoyably varied soundtrack. Of the new songs though, only "If Only You Would Listen" is instantly memorable: The songs also include a Stevie Nicks classic and some of those Jack Black, Warren Fitzgerald, Mike White and Sammy James, Jr. wrote for the film, and "In the End of Time" and the title song are the real showstoppers here. 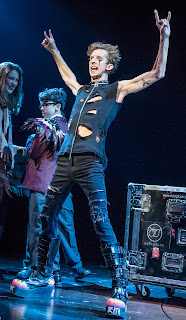 I didn't dislike School of Rock, and in fact actively liked much of the music, but it did leave me cold in many ways. Anna Louizos' set design is about as functional and unspired as you're likely to see at this level, and Fellowes' championing of people being true to themselves is only skin deep, as the attitudes to sexuality prove. I'm sure the creatives see one of the kids having gay dads as a really positive step, but one of those dads is 100% Mr Humpreys mincing stereotype. More worryingly, even the fey child who like costume design is primarily used as a punchline: Dewey tells him to take design inspiration from Ziggy Stardust, and is then appalled to be handed a lurid jumpsuit as a result. 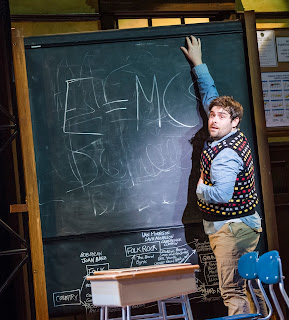 In the end, Dewey goes to jail for fraud and endangering children. No actual charges of paedophilia are made against him, but try convincing the other cons that - he's dead within a week. It's nice actually, all the kids come to his funeral and they buy a wreath that spells out "TO BE FAIR HE WAS A BIT MORE TOUCHY-FEELY THAN WAS STRICTLY APPROPRIATE." It's a lot to put on a wreath but they're rich kids so they can afford it. They might actually be rich enough to understand Shakespeare without Julian Fellowes having to dumb it down for them, imagine that. ALL RIGHT FINE, that's not how it ends, but it totally would in real life. This is still Lloyd Webber's best musical for many years, but a lot of the heavy lifting is being done by other people's songs.