Theatre review: Our Lady of Kibeho 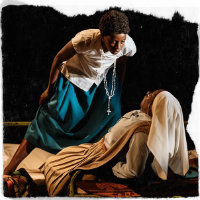 Definitely fitting the bill of a long-awaited show, ten years after The Mountaintop first became a surprise smash (and notwithstanding her doing book duties on a musical,) we finally get a follow-up play from Katori Hall in London. Our Lady of Kibeho is a much more epic affair than its predecessor but it shares its theme of looking at an incredibly dark moment in black history from a fantastical, mystical perspective, and bringing an element of hope and humour to it. Inspired by true events, Kibeho is a remote village in the mountains of Rwanda, home to breathtaking scenery, a Catholic girls' school and not much else. But in 1981 it looks like it could be put on the map in a big way when Alphonsine (Taz Munya,) an unremarkable student who, as a Tutsi, is in the minority at the school, claims to have had a vision of the Virgin Mary.

She's punished for lying and attention-seeking, but her friend Anathalie (Liyah Summers) soon starts going into trances as well. When bully Marie-Clare (Pepter Lunkuse,) previously the girls' biggest doubter, becomes the third in their "holy trinity" of seers, people start to take them seriously. 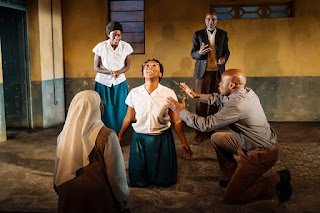 The students have a pair of flawed authority figures led by headmaster Father Tuyishime (Ery Nzaramba,) who's keen to believe the girls are telling the truth, but whose pastoral care for the students may be complicated by attraction to some of them - which, as he's a comparatively young priest, some of them reciprocate. His opposite is the deputy head, Michelle Asante's Sister Evangelique. A textbook sadistic nun, she's not entirely villainous, and some of her brutality comes from the pragmatism of trying to educate girls in a culture that still isn't convinced they should be, and would be happy for an excuse to close the school down. 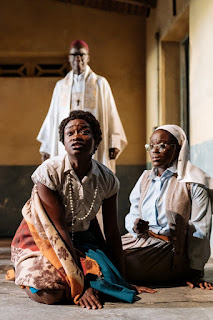 James Dacre's production takes the opportunity of the story's supernatural edge to introduce some stage illusions making for some showstopping scenes, including some creepy moments that borrow from horror. There's also a lot of lighter moments as Hall's writing remains very witty, and the school also has to contend with the Bishop's (Leo Wringer) plans to turn Kibeho into a moneymaking, must-visit Catholic pilgrimage site like Fatima, and Papal envoy Father Flavia's (Michael Mears) brutal tests on the trinity to decide whether or not the Vatican will endorse them as miracles. 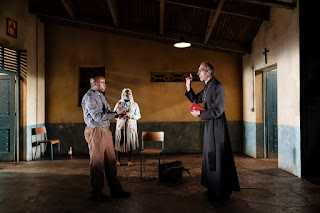 It's that great balance of maintaining the interest and entertainment level in the service of something deeper. The Virgin Mary's messages are visions of an idyllic Heaven on Earth that could be the country's future; this being Rwanda, we know to expect a much bloodier alternative to be revealed at some point. But this isn't allowed to overshadow the play, which ends up a sensitive study of Catholicism in Africa, and how it's formed the lives of the men, and particularly women there. Hall could be one of those playwrights whose early masterpiece is held up against everything else they ever write; if Our Lady of Kibeho isn't quite as instant a classic as The Mountaintop, it's only because you get a different kind of intensity from a two-hander set in a small space; but it certainly shows that early hit wasn't a fluke.

Our Lady of Kibeho by Katori Hall is booking until the 2nd of November at the Theatre Royal Stratford East.