Of course, Vassa isn’t the original title. The full title is Vassa Matter You? (Hey!) Gotta No Respec’? 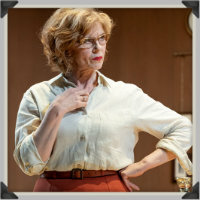 The last time Mike Bartlett wrote for the Almeida he did it in the style of Chekhov, and he’s back with the Russians now, although this time it’s a direct adaptation. Maxim Gorky’s Vassa Zheleznova turns out to be a play I’ve seen before, although either that adaptation or this one (or both) must be pretty loose, as the stories appear to have some massive differences. Bartlett’s is a claustrophobic family drama: Vassa (Siobhán Redmond) is the matriarch of a wealthy industrial family who rules with an iron fist and absolutely no velvet glove – the tone she’s established for the household is one of undisguised cruelty and personal attacks. It’s not just their business fortunes that are built on blackmail and corruption: Every relationship in the family seems to have come about because Vassa or her henchman Mikhail (Cyril Nri) has dirt on someone, right down to the servants they despise, but who they keep on because they have leverage that means they can treat them like shit.

Vassa’s favourite butt-monkey is her youngest son Pavel (Arthur Hughes,) who she’s been trying to pack off to a monastery for years despite him being agnostic, because she doesn’t like having to look at his disability every day.

Pavel’s currently upset because his wife Lyudmila (Sophie Wu,) has run off with his uncle Prokhor (Michael Gould,) something his older brother Semyon (Danny Kirrane) finds hilarious. Vassa’s main preoccupation is with the business, which is in danger on two fronts: The workers are getting restless about their mistreatment, and her husband is slowly dying of syphilis – and once he’s dead, Prokhor will be able to take his investment out of the company it’s been propping up. Because of her father’s impending death, eldest daughter Anna (Amber James,) the only one of their children to have moved out and started her own family, has returned, and her new perspective means she sees her family home with new eyes and is horrified by it. Even so, her mother’s confident that she can make a powerful new ally out of her.

What makes a couple of hours with these unredeemable people bearable is that Vassa is largely played out as the darkest of comedies, the constant stream of snark about Pavel’s appearance and Semyon’s wife Natalya’s (Kayla Meikle) weight getting uncomfortable laughs, although the abuse of the servants has much darker consequences. Still, I wouldn’t have wanted to be Bartlett writing these characters for months – I feel exhausted just from listing the fuckers. Tinuke Craig’s production amps up the weirdness: Instead of its specific original setting, an opening caption tells us it takes place shortly before “a revolution,” and Fly Davis’ design is straight out of the drabber end of the ‘60s (the family appear to live in a characterless conference centre, possibly as a nod to the fact that the business matters above all else.) But the original Russian names and obligatory samovar very firmly remind us which revolution is looming, and the disconnect is part of what makes the place unsettling – so does Joshua Pharo’s lighting, which throughout the second act keeps alternately dimming and brightening, making the time of day or night incredibly vague.

The effect is overtly purgatorial, and by the third act the actors don’t even get to leave the stage when their characters leave the room, increasing the feel of them being trapped there. One thing Vassa leaves you in little doubt of is why Gorky became the great Soviet writer, as its hellish landscape is an attack on capitalism and the monsters at the top of its food chain, their human relationships defined either by complete contempt and abuse, or by trying to drag others into the same misery as themselves. Redmond, a late replacement in the title role, sinks her teeth into a true theatrical monster at the head of a strong cast. It’s undoubtedly a strange, unsettling evening – at times a difficult watch but one of those you want to mull over and dissect for a while afterwards.

Vassa by Maxim Gorky in a version by Mike Bartlett is booking until the 23rd of November at the Almeida Theatre.