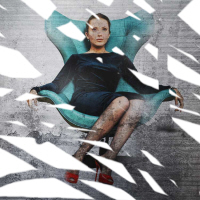 Like a lot of bloggers I've been plugging the work of fringe ensemble The Faction for some years now, but recently they haven't half been making it hard to maintain that enthusiasm. There was last year's "leave 'em wanting less" season, of course, and now before Vassa Zheleznova even starts there's a virtually unusable programme costing £5: Inspired by the title character listening to the Shipping Forecast, the programme is an A2 sheet folded like a map, making opening it and finding any information a tricky business. The cost is because it includes the playtext, although whether you'd be able to read it in the correct order is a different story. And speaking of different stories, Emily Juniper has transposed Gorky's play from revolutionary Russia to Liverpool during the 1990s dockers' strike.

Vassa (Siân Polhill-Thomas) runs her husband Sergei's family shipping company with an iron fist and an open loathing for all humans who aren't her, a loathing only made more intense by the strike. When Sergei (Luke Shaw) is charged with the rape of an underage girl, Vassa convinces him to kill himself before the scandal has a chance to damage their business. 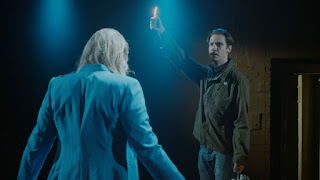 Gorky's play is a bit of an obscure one so I haven't seen it before in either of its incarnations (he wrote it in 1910 and extensively revised it in 1935,) and can't comment on whether the original setting is as distracting as Juniper's Liverpudlian one, but certainly here all the talk of unrest and negative headlines dominates the first few scenes. It means I struggled to figure out who anyone was, which is a disadvantage in a story that ultimately comes down to family (the programme does contain a breakdown of who everyone is but again, trying to open a broadsheet-sized piece of paper mid-show and consult it isn't exactly practical.) 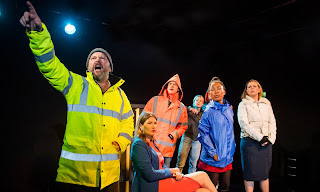 So by the time I got my head round who everyone was it was too late to care, especially as Vassa herself is a panto villain, Cruella De Vil without the charm or subtlety, so it's pretty obvious from the start the play will consist of her hissing at the rest of the characters for two hours. The storytelling remains muddled - I must have missed why Melnikov (Christopher Hughes) suddenly lost an eye - which is particularly disappointing from a company who used to be such powerful storytellers. Meanwhile Kate Sawyer, one of the Faction's best, and certainly most loyal actors, has a thankless role as Vassa's henchwoman. I notice as well that director Rachel Valentine Smith is continuing to try and emulate Ivo van Hove's soundscape from A View From the Bridge, but a fringe budget and rehearsal period clearly haven't been enough for sound designer Max Pappenheim to create a similarly nuanced soundtrack; so instead we get a relentless background drone that only makes this soap opera - Brookside-by-Volga - more of a dull, headache-inducing evening.

Vassa Zheleznova by Maxim Gorky is booking until the 9th of July at Southwark Playhouse's Little Theatre.