Theatre review: This Much [or An Act of Violence Towards the Institution of Marriage] 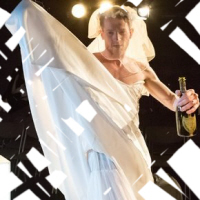 This Much is written by John Fitzpatrick, although the cast list says it's also partly developed with director Kate Sagovsky and the original cast, and these many cooks may be one reason the end result lacks focus, despite many strong elements. Subtitled An Act of Violence Towards the Institution of Marriage (which I imagine is a quote from an objection to the legalisation of equal marriage, although I don't know the source and a quick google only brings me back to this play,) it looks at how a gay couple might actually find themselves more constricted by their increase in options, not less. Unemployed Gar (Lewis Hart) has been dating Anthony (Simon Carroll-Jones) for about eighteen months, and and now they're living together, but while Anthony has settled into a cosy housewife role, Gar's eye is wandering.

He bumps into Albert (Will Alexander) in a supermarket after having chatted to him on Grindr, and starts an affair with him. But what happens when Anthony inevitably finds out isn't quite what might be expected. 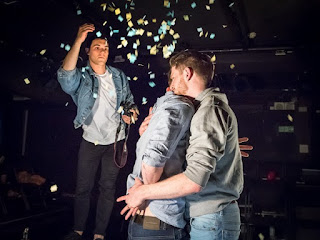 Built around musical breaks for the kind of songs you'd likely hear at a wedding reception (plenty of Whitney and Pet Shop Boys,) This Much does feature a gay marriage, although something of an ill-advised one that doesn't go as planned. One thing the production excels in is creating a sense of chaos and confusion through physicality, and the simple set that suggests Anthony's ordered home is soon looking pretty trashed. 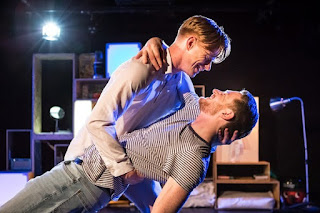 Where it's weaker is in the relationship between Gar and Anthony; the dance sequences that bookend the show do a good job of setting them up as a couple who repel as much as they attract each other, but it's not reflected in their interactions with each other in the main body of the play: They still have sex but Gar in particular seems bored with it, and even if Albert is initially just a sex object for him, this couple have a lot more chemistry - someone like Gar who's, possibly a bit too much, drawn to the unpredictable, is clearly more interested in Albert, who'll dare him to get his cock out in the park, than Anthony, who's looking for a nice wine for dinner and pestering him to get a job. Perhaps the whole point is that emulating a more conservative kind of relationship will see some people making the same mistakes as heterosexual married couples over the centuries, but it leaves us with a relationship we don't hugely care about - and surely they would have discussed monogamy sometime earlier than, say, the wedding night. 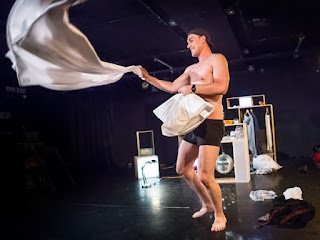 See, production photographers? You can do it!

Even if their characters aren't all likeable though,the cast are a very watchable and sexy trio - the very pretty Alexander does lose a few points for one of those septum rings that looks like he's got a permanent drop of snot hanging off the end of his nose, but he and Lewis Hart do get two
FULL FRONTAL-MALE NUDITY ALERTS!
apiece (and what a piece it is Mr. Hart, etc etc.) Much as I like a short running time though, I think I could have done with another 15 minutes to really establish the characters - there's tantalising hints that Gar's backstory of family problems might be what led him to seek out a stable partner he doesn't really have that much in common with, but I would have liked to have seen the show really try and get to grips with what was wrong with the central relationship, and how it went as far as it did.

This Much [or An Act of Violence Towards the Institution of Marriage] by John Fitzpatrick is booking until the 2nd of July at Soho Theatre Upstairs.