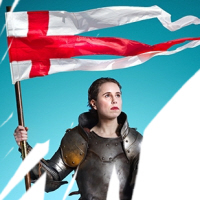 It's a year of gender-flipped and gender-blind Shakespeare, with a particular emphasis on giving women a shot at more good roles, and until Glenda Jackson's Lear arrives the most high-profile example must be Future Dame Michelle Terry as Henry V at the Open Air Theatre. It's not at the forefront of Robert Hastie's production but the lead actor's gender is acknowledged: During the opening speech the Chorus (Charlotte Cornwell, unsure of her lines) seems to be choosing who to give the role to, passing over more obvious choices to give the crown to Terry's slight figure. Appropriately Alex Bhat, who looks most put out to be overlooked in favour of a woman, later returns as Henry's would-be nemesis the Dauphin, pointedly sending the king a gift of the balls she doesn't have (although as we know from Cleansed, Terry does have a cock now.)

And there's a complementary piece of cross-gender casting as Henry's eventual queen, the French Princess Katherine, is played by a man, Ben Wiggins. 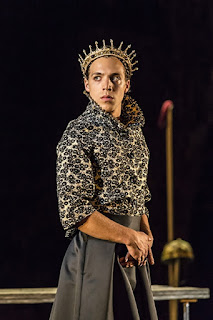 But before we can get to awkward wooing we need to get the violence out of the way, and on a dubious and convoluted pretext, Henry gets the go-ahead to invade France and proclaim himself its rightful King, which he does with a comparatively tiny army, and a ruthless streak that nobody suspected he had in him. Playing up not so much her gender as her size, Terry's Henry is first seen in shorts, bounding grinning into the war room like a child, but one to be underestimated at great peril. 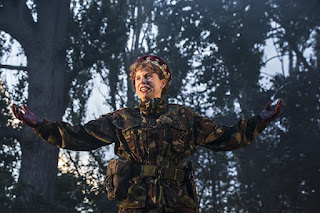 Terry doesn't quite reconcile the opposing sides of Henry's personality but does present both of them convincingly, switching between them in a way suggesting a power-hungry sociopathy: She's a powerful orator, and Hastie comes up with a way to give the St Crispin's Day speech a warmth and highly personal touch, by having Williams (Jack McMullen) initially accept Henry's offer to walk away, only for Henry to deliver the rest of the speech directly to him in the audience, and convince him to stay. (Another interesting moment for McMullen's Williams sees him not cower when the king is revealed as his secret adversary, but have to be held back from fighting him.) On the other hand the disinterested ambition under the warlike words are revealed in Henry absolving himself from all guilt over his soldiers' fates, and in the climactic wooing scene - often played as Henry trying to get his future wife's love for real, Terry makes it abundantly clear this is just a formality and Katherine is part of the package he's signed for. 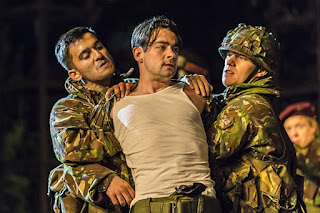 Anna Fleischle's modern-dress design allows the army to look a bit more diverse in general, with women playing all four of the Captains from the four corners of Britain, most prominently Catrin Aaron as Fluellen and Cat Simmons as Gower. It's a bit odd though, that Hastie doesn't change the pronouns, when acknowledging that the captains are female would make perfect sense in this setting. Over on the French side, Bhat's petulant Dauphin proves the truly childish of the two antagonists, and contrasts with Dwane Walcott's characteristically steady Constable. 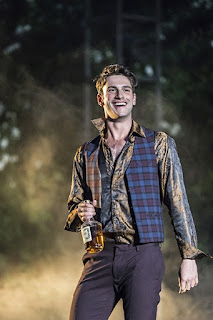 Between Fleischle's simple set of metal grills through which dry ice escapes and into which the soldiers tumble into mud, Avgoustos Psillas' surround-sound design and the slowly encroaching darkness, the battle scenes are particularly well-served here. Less so the comedy, despite a likeable Pistol from Philip Arditti, although there's plenty of innovative moments, like having the English lesson between Katherine and Alice (Joy Richardson) take place as they fence, another of the production's little twists on gender expectations. 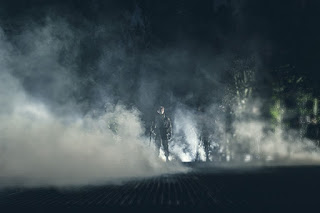 The Open Air Theatre advertises the show as being topical to the upcoming Chilcot report but of course it also comes as Britain's relationship with Europe is more fraught than it's been for decades. Despite weather that should have seen the performance cancelled it carried on tonight, appropriately on a night the country voted to commit economic suicide in the name of petty xenophobia and for the sake of a charismatic leader's thirst for power: Terry's playing of Henry as one of the boys on the surface but coldly ambitious and willing to knock down everything in his way in reality, is a painfully appropriate take on the character.

Henry V by William Shakespeare is booking until the 9th of July at the Open Air Theatre, Regent's Park.