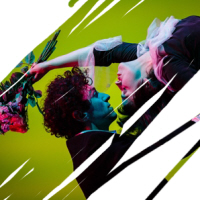 I'm not immune to the charms of something a bit whimsical, but I think my tolerance can only take small doses. It's one reason I was sceptical about Emma Rice taking over Shakespeare's Globe, as when she was Artistic Director of Kneehigh their house style was essentially to pile on whimsy with a shovel. Her former company are now Associates at the Globe, and for Rice's first venture into the Swanamaker she reunites with them for Daniel Jamieson's The Flying Lovers of Vitebsk. It's named after the Russian birthplace of the artist Marc Chagall (Marc Antolin) and his tendency to put couples in mid-air into his paintings. Framed as a phone call between the elderly Chagall and his agent, it sees him reminisce about his relationship with first wife Bella Emberg Rosenfeld, a marriage that ended up in the centre of constant political turmoil.

So we flash back to the first meeting between Marc and Bella (Audrey Brisson,) and a relationship spanning two World Wars, the Russian Revolution, and Chagall's popularity fading in his own country even as he's lauded by the art establishment abroad, and credited with creating German Expressionism. 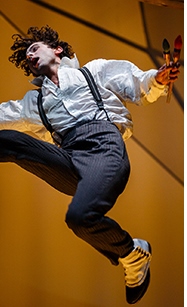 One unfortunate similarity to Rice's first show outdoors is a set that puts more obstructions than usual in front of the audience, Sophia Clist's wooden platform in the middle of the stage having a number of poles sticking out of it, from which the actors swing and props hang; not great for sightlines from the sides which, of course, in the Swanamaker translates to about 95% of the audience. The springy, raked stage also has a tendency to catapult large props into the Pit: Some books and a large suitcase came crashing towards the front rows in the first act to Brisson's obvious alarm, and when I came back to see a large bust of Marx on the stage after the interval, I thought they'd really determined to kill an audience member or two. 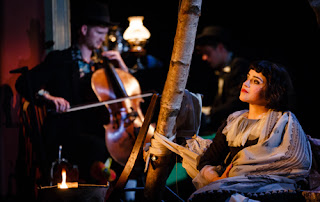 The show itself is, of course, whimsypalooza, the story told through clowning, song, tumbling, and the release of balloons and banners. It's all a bit much for my twee-averse constitution, and does mean that whether it's dealing with first love or brutal dictatorship, the show is told with the same tone and pace throughout. It got very dull for me very quickly, although the tourist-heavy audience seemed charmed.

The Flying Lovers of Vitebsk by Daniel Jamieson is booking until the 2nd of July at the Sam Wanamaker Playhouse.