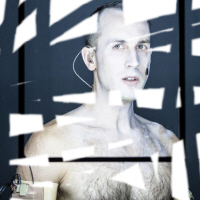 Tickets to Andrew Schneider's YOUARENOWHERE are hard to get hold of, and there's a lot of positive buzz around the show but even so, looking at the cast bio sheet and seeing that until recently Schneider was a member of The Wooster Group had me toying with the idea of making a run for it. There's a reason the show's title is written as a single word - I wonder what it says about you how you read it first, as I immediately saw it as You Are Nowhere, but since it was pointed out to me that it could also be read as You Are Now Here that's all I've been able to see. The title is, of course, both of these options, and the piece - it's more performance art than a play - deals with this kind of duality, with being in two places at once, and in neither.

Exactly what I mean will have to remain vague, as not only is the content, which deals with esoteric areas of physics and philosophy, complex, but the whole performance also turns on a coup de théâtre: We may not have been asked to hashtag keep the secrets on the way out, but the element of surprise is important, so I won't be giving away the most important aspect of the performance. 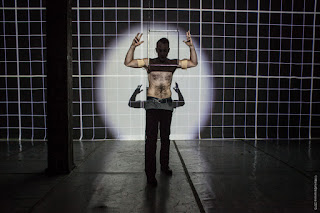 I can say that the Gate's website has a call-out for volunteers, and says this is a way for people who've missed out on tickets to experience the show in a different way. I can also say that it opens with Schneider arriving on stage, in flashes of light, in a state of some confusion. During one flash he appears to be dead on the ground while an identically-dressed man (Peter Musante) looks over him; by the next flash he's alone again and back on his feet. He gives a lecture on physics, particularly on theories of time and how each of us perceives it differently. It's broken up with personal recollections, until a point where Schneider, or at least the version of him giving the lecture, is forced to question his own identity and where he fits into the alternate realities he's just been talking about. It's baffling, striking and memorable, and frustratingly resistant to being reviewed in any remotely coherent way.

YOUARENOWHERE by Andrew Schneider is booking until the 18th of June at Shoreditch Town Hall (returns and volunteer places only.)