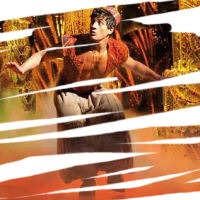 When the Lyric Hammersmith took the frankly bizarre step of not only announcing but also putting on sale their 2016 pantomime when their 2015 one had barely opened, I couldn't help wondering if they were getting in quick before Disney© came to town, in case they announced that Aladdin® would henceforth be theirs and theirs alone to stage. After their films of Beauty and the Beast™ and most successfully The Lion King™ became stage shows, I did wonder why the 1992 Aladdin® was taking so long to join them, as it always seemed very innately theatrical to me. It finally has and now comes over to the West End, with the cartoon's well-loved original songs by Alan Menken©, Tim RiceDAME and the late Howard Ashman© joined by a few new numbers* from Menken with lyrics by Chad Beguelin™, who also provides the book. Although it's years since I saw the film it's one of my favourite Disney© cartoons so I've seen it a lot of times, and can tell this stage adaptation sticks pretty close to the script.

In fact I've seen Disney's© Aladdin® referred to as a nostalgia piece, and it's hard to disagree as familiarity is one of the main charms of this stage adaptation, as evidenced by the obvious excitement of the women in front of us when "A Whole New World"© started. Evil Alex is very picky about what he wants to see but texted me excitedly when this first went on sale to ask if he could come along (of course Evil Alex is, basically, a hairy child.) 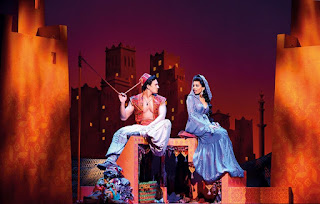 As played by Dean John-Wilson's pecs®, Aladdin® even looks uncannily like his cartoon counterpart. Not that any of this faithfulness to the original is necessarily a bad thing, as the film is one of Disney's© strongest comic offerings. In the town of Agraba© where, the opening number announces in a nod to the ridiculously buff cast, "everyone has 0% body fat," Aladdin® is on the run for stealing a loaf of bread - yes, in a story featuring a genie™ and a magic carpet, the biggest fantasy element is that he might actually eat carbs. He meets Princess© Jasmine™ (Jade Ewen®, the 47th Sugababe™,) when she's in disguise, and they fall in love™; but she's only allowed to marry a Prince©, a situation remedied when Aladdin® finds a magic lamp. 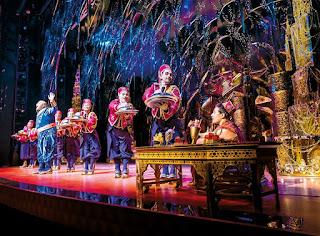 Much of the script may be faithful to the film but as the Genie's™ lines were largely ad-libbed by Robin Williams©, that's where the biggest changes have come - as played by Trevor Dion Nicholas® he's still the undoubted show-stealer though, with the biggest numbers "Friend Like Me"© and "Prince Ali"©. Despite the show's big budget, it's pleasing to watch little cheats in the latter number, like having the ensemble constantly exit and return a few moments later in a new outfit, to make Prince© Ali's entourage look bigger. It is a bit odd though that the Genie's™ main concession to its UK audience is a string of references to Sir Bruce ForsythGOODGAME. 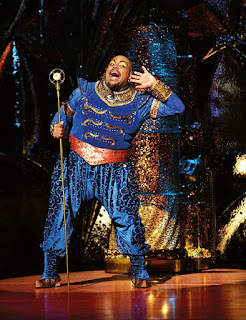 Probably so as to avoid looking too much like The Lion King™, the show has dispensed with the animal characters - instead of a monkey Aladdin® now has a trio of comedy sidekicks (Nathan Amzi™, Stephen-Rahman Hughes™ and Rachid Sabitri™.) Sadly the film's worst element is also carried over - the parrot Iago© is now a human (Peter Howe®,) and an impression of Gilbert Gottfried™ isn't really much less annoying than actual Gilbert Gottfried™ - at least he doesn't end his sentences with "...NOT!" because '90s nostalgia only goes so far. 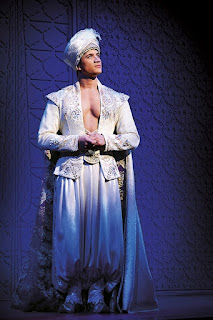 Between Iago© and his master Jafar® (Don Gallagher®) the bad guys are the closest thing to making Disney's© Aladdin® seem like a ridiculously over-budget© panto. But director Casey Nicholaw™, and designer Bob Crowley® haven't skimped on the spectacle. Evil Alex and I were in the second-from-last row but the Prince© Edward has good sightlines and Dean John-Wilson's pecs® are of course visible from quite some distance§. I'd say I did mainly enjoy this as a nostalgia trip, and there's not a great deal of depth and real originality on offer, but even if it could use a little more heart it's certainly a lot of fun™.

Disney's© Aladdin® by Alan Menken©, Howard Ashman©, Tim RiceDAME and Chad Beguelin™ is booking until the 11th February 2017 at the Prince© Edward Theatre.

*plus "Proud of Your Boy,"© which was cut from the film and restored here.

§Phill's text request to let him know whether John-Wilson's bellybutton was an innie or an outie, though, we couldn't help with.
Posted by nick730 at 23:27