Theatre review: A Subject of Scandal and Concern 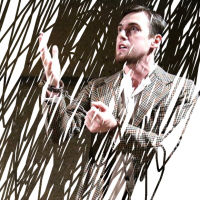 Theatre seems currently interested in reminding me of things I could have been arrested for if I'd been born decades or centuries earlier - the gay thing and the depressive thing on Friday, and today the atheism thing, as John Osborne tells the story of the last trial for blasphemy in England. A Subject of Scandal and Concern was originally written for television, and this stage adaptation hasn't been seen in London before, making Jimmy Walters' production another of the Finborough's trademark rediscoveries. The setting is 1842 Gloucestershire, where poor teacher George Jacob Holyoake (Jamie Muscato) is holding a lecture. He has a speech impediment and a tendency to dry up mid-speech, but despite being a poor speaker he's in demand to do so, as few other Socialists are willing to give public lectures.

This one in Cheltenham finds a hostile crowd as, having deliberately avoided the subject of religion in his talk, the Q&A session afterwards demands he give an opinion. 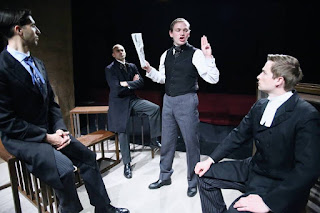 His suggestion that, given so many live in poverty - his own daughter is seriously ill due to malnourishment - the clergy should have their wages cut, is reported in the local papers as an affront to the church, and puts pressure on the authorities to have him arrested. Up against a slick prosecution lawyer (Richard Shanks) and a jury that includes one of his accusers, Holyoake defends himself. The play's origins in TV are apparent in both the use of a narrator (Doron Davidson) and the brevity, the latter definitely working in its favour as it gives a concise and tense account of the trial. 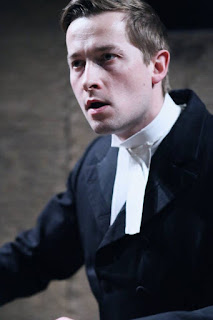 To counter this screen origin, on the other hand, Walters gives his production an overt theatricality: The stage is a plain traverse shared with the Finborough's main production, on which stand the witness boxes of the courtroom, and the cast move them around the stage to represent tables and prison cells, lending a sense of both movement and urgency. 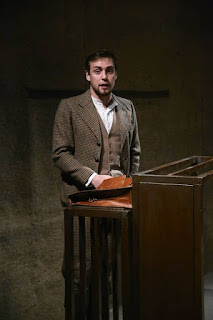 I think this is the first non-musical production I've seen Muscato in, and he acquits himself well as the impassioned speaker whose stutter isn't as big an impediment as his not knowing when to stop - the play uses the audience as the jury, and with their prejudices in mind you can feel the moment when he might just have convinced them, slipping away as he goes too far in his enthusiasm. From a modern perspective of course the trial is completely rigged - the fact that the fliers for the speech didn't say he'd be expressing atheist views is repeatedly used against Holyoake as proof he was trying to ambush people with them, despite the fact that he deliberately avoided the subject until goaded into it. With its deliberately open-ended conclusion A Subject of Scandal and Concern is a bit abrupt and something of a curiosity, but one given a sharp and arresting production here.

A Subject of Scandal and Concern by John Osborne is booking in repertory until the 7th of June at the Finborough Theatre.