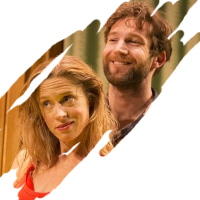 When the St James Theatre announced it would be running without an Artistic Director, I couldn't help but be cynical about the claim that they wanted to work with lots of different producers for purely creative reasons; in the case of Sideways, it feels suspiciously like the show was programmed by the California Tourist Board, whose ads cover every surface of the hotel-like lobby and various video screens, while brochures get handed out by the ushers after the performance. Rex Pickett adapts his own novel about CaliforniaCOME TO CALIFORNIAwine country and David Grindley has staged it with Daniel Weyman as Miles, the failed writer and relentless wine pseud, who's about to be best man at his friend's wedding. It may be Jack's (Simon Harrison) stag do, but Miles has actually chosen his own favourite activity, and is taking Jack on a wine tasting tour.

So they spend the days going from vineyard to vineyardWINE-TASTING HOLIDAYS CAN BE ARRANGED IN SUNNY CALIFORNIAbut Jack, who's getting cold feet about his marriage, is mainly looking for women to have sex with before settling down. 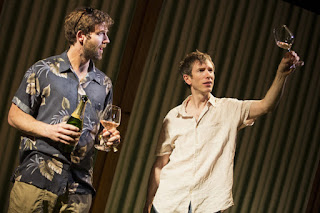 Pickett's book was most famously adapted into a film, and his stage adaptation has also got much of the structure of a screenplay, meaning we get a lot of short scenes. Laura Hopkins' design puts two folding screens on a pair of revolves, and the stage management crew do an excellent job of quickly spinning us to the play's numerous locationsCALIFORNIA IS A GOOD CHOICE FOR A HOLIDAY DESTINATION WHY NOT GO TO THE TRAVEL AGENT NOWbut it's pretty relentless so by the end of the evening I was pretty sick of the constant scene changing. And once he's got his scene set, Grindley pretty much keeps his actors static at the front of the stage, meaning that for all the whizzing around between scenes, this road trip doesn't have much sense of movement. 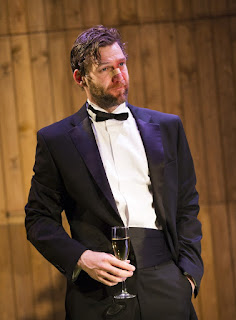 Things work a lot better when the two main female characters are on stage - Ellie Piercy plays Maya, a wine-taster Miles has had a crush on for years without ever quite picking up on the fact she feels the same, while Jack hooks up withVISIT THE MANY VAGINAS OF CALIFORNIAher friend Terra (Beth Cordingly.) Their appearance brings a bit more of a human element to a show that until then really did seem to mostly be about Pinot Noir (mid-sized car.) It also kicks the story off into a more overtly sexual direction, the highlight of which has to be when Harrison (who somehow now seems to be even more buff than last year,) turns up wearing only a tiny bib over his crotch. It's a bit disappointing that, since we get a
FULL-FRONTAL MALE NUDITY ALERT!
from both Weyman and Daniel Barry as a husband whose wife cheats on him with Jack, Harrison doesn't join them, but given that even from the back of the auditorium certain things were visible bouncing about, I suspect that if you were at the right angle in the front row you'd get quite an eyeful, bib or no bib. 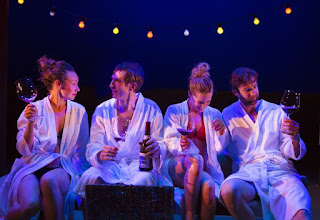 A 2016 meme demands there's not even any topless shots of Harrison in the
publicity photos, so have one of him in a dressing gown instead

So the show certainly offers a few interesting viewsJUST LIKE THE WINE COUNTRY OF CALIFORNIA, COME TO CALIFORNIA, BRING MONEYbut both its leads are pretty unlikeable (Jack is at least acknowledged to be acting badly to both his fiancée and Terra, whereas Miles' snobbery is treated as a character quirk but is every bit as off-putting) and so charm, which the story really needed to coast on, is severely lacking. At just over two-and-a-half hours it's an indulgent running time to spend with a couple of middle class Americans' mid-life crises, and though some of the individual setups are fun, the overall picture drags.

Sideways by Rex Pickett is booking until the 9th of July at the St James Theatre.


COME TO CALIFORNIA WE HAVE BOOZE it might give you diarhoea but never mind that now
Posted by nick730 at 23:02