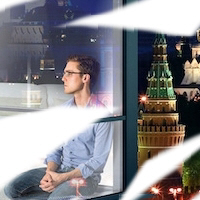 Mike Bartlett’s latest play doesn't mention Edward Snowden, but it makes no attempt to disguise its inspiration: Wild opens with American IT expert Andrew Wild (Jack Farthing) hiding in a Moscow hotel room, a couple of days after leaking a huge amount of data online, revealing the true extent to which the US Government spies on its own citizens and those of its allies. Miriam Buether's proscenium arch set is a pretty narrow letterbox - not always great for sightlines from the back, it has to be said - through which we see all that Andrew's world has currently shrunk down to. He's made a lot of powerful enemies overnight and has had to sequester himself without a phone or laptop to stop them tracking him down. Hopefully on his side is an organisation that's unnamed, but which can again be easily identified - it's reminiscent of WikiLeaks - and which has put him up in this safe room.

Andrew is visited in turn by a woman calling herself Miss Prism (Caoilfhionn Dunne) and a man calling himself George (John Mackay.) Each claims to work for the organisation but to be unaware of the other's existence. 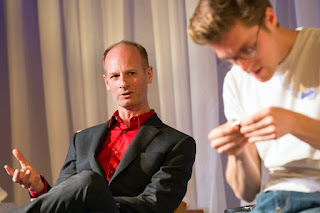 Bartlett's play does of course deal with the issues brought up by this kind of mass disclosure, looking into the erosion of privacy that starts with everyone putting details of their private lives online on Facebook and Instagram, which naturally leads to questions of where the line is drawn between that and what the CIA is doing. It focuses even more though on the whistle-blower himself, and whether the personal cost is worth it in the end - if the world's systems don't collapse as a result of his revelations and people aren't entirely surprised at the extent to which they're being spied on, is it worth Andrew giving up everything he's ever known? 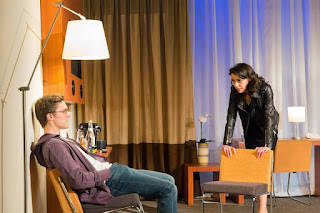 His life itself is also in danger of course, as both of his visitors point out - Miss Prism says she's there to stop him from killing himself, as many whistle-blowers do after exposure; George gleefully points out how this fact could be used to disguise an assassination. And so while it may have political points to make, Wild plays out as a paranoid thriller, and James Macdonald's production shifts brilliantly between the almost comic scenes with Dunne's slightly drunk Miss Prism and her nervy enthusiasm, and the chilling, brief appearances by Mackay's quietly sinister George, taking a perverse enjoyment from Andrew's fear that he might actually be there to assassinate him. Either, both, or neither could be from the organisation they claim to be from, there to help him in return for his becoming their spokesperson; or they could be subtly interrogating him on behalf of someone or something else. 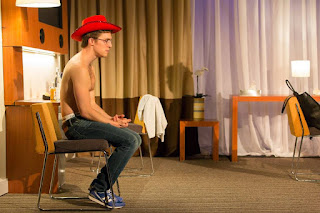 It's interesting and at times gripping - the choice of music over the final blackout is downright nerve-wracking - but Wild is one of those plays that will inevitably be remembered for a single moment, as its themes of suspicion and uncertainty take literal form in a coup de théâtre that will challenge YOUARENOWHERE for the most audacious theatrical moment of the year. As the play nears its end the discussion between the characters starts to feel a bit repetitive, but Bartlett has a twist in mind that embraces theatricality and turns everything you thought you knew about the play on its head. (Plus I suspect the technical elements of the finale might be the reason for Farthing's otherwise gratuitous shirtless scene, and who can complain about that?)

Wild by Mike Bartlett is booking until the 16th of July at Hampstead Theatre.