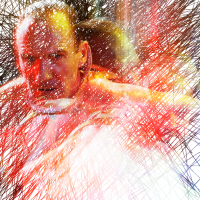 In his first new Shakespeare production since leaving the RSC, Rupert Goold takes on a (mostly) modern-dress Richard III that opens by reminding us of the recent discovery of the real Richard's remains under a car park in Leicester. As the famously curved spine is taken out of the ground, Ralph Fiennes' Richard stands over his own grave to deliver the "Now is the winter of our discontent" speech. A woman a few seats away from me was trying (and failing) before the show to get me to agree that this overt reference to recent events was patronising. In fact the idea of bones being exhumed and reburied becomes central to Hildegard Bechtler's design - the body of the late Henry VI is now a skeleton* about to be reinterred, while for every death Richard causes on his way to the throne, a skull is illuminated on the back wall.

In the last year I've got used to seeing Richard III as originally written, the conclusion to the epic history sequence of the Wars of the Roses, whether as part of Shakespeare's first tetralogy or as a rewritten trilogy, so it's a jolt to go back to jumping straight into this part of the story. 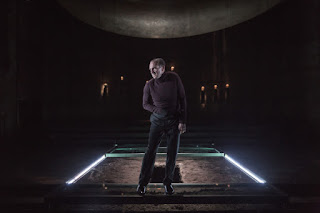 Following the civil war between two factions of the ruling Plantagenet dynasty, and with the York faction now comfortably on the throne, things look to be stable in England for the first time since Henry V. But King Edward IV's (David Annen) youngest brother Richard is tired of doing the dirty work for everyone else, and wants the power to himself now. If bumping off family and allies is the surest way to achieve this, no problem. 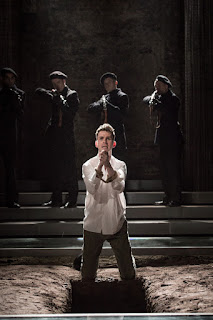 Without all the context, and with a cast of characters mostly called "the Duke of....." the play needs a very clear telling, and for all the gimmicks he's known for, Goold still has a knack for clarity and an obvious attention to detail in the text. This is a straightforward but nuanced production, Fiennes choosing the play up the black comedy of the central psychopath, and the rest of the production follows suit: I don't think I've seen Hastings (James Garnon) and his oblivious (because he's been too busy with his phone to pay attention) assurances that everyone's safe under Richard's rule, even as we know he's next for the chop, so effectively played for uncomfortable laughs before. 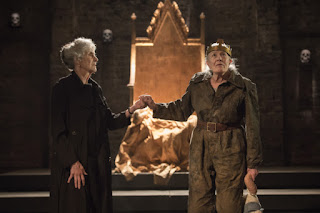 This isn't Goold at his most high-concept but his Richard III is full of nice little touches; Vanessa Redgrave plays Queen Margaret not as pure rage but as drifting off into insanity, turning up in a boiler suit and clutching a doll, the focus of all her affection now that Richard has robbed her of her whole family. Once Queen Elizabeth (Aislín McGuckin) is similarly bereaved, Margaret passes on the doll. There's also visual cues to the country's slow descent into totalitarianism under Richard, as the presence of armed guards on the stage gradually increases, and while Finbar Lynch plays Buckingham with a threatening, thuggish undertone, at some point even he is not enough. When Buckingham baulks at Richard's plan to kill the princes, he's swiftly replaced with Tyrell (Annen,) here a sadistic clone of Raiders of the Lost Ark's Major Toht. I'm not convinced by medieaval armour encroaching on the modern-dress for the final battle though - it's like a mirror of the final device in Goold's Romeo and Juliet but its significance is more muddled here. 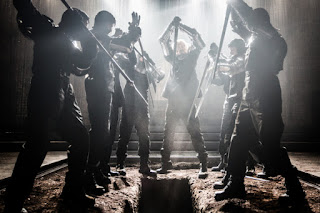 I haven't read other reviews but imagine there might have been some controversy about a moment of sexual violence near the end; I'm a bit on the fence about it, I can see it as a logical indicator of how far Richard has fallen as well as a spur for Elizabeth to defy and ultimately doom him, but it does still have the feel of gratuitous shock value. In general though this is a strong production for the women - always likely to steal this show - going up against an overtly misogynist Richard. Susan Engel is a steely Duchess of York and Joanna Vanderham makes as much sense of the tricky character of Lady Anne as possible - the twisted wooing scene is still hard to buy but Richard's announcement that his queen has been taken mortally ill is here done to her face as a threat, confirming her as less queen than hostage. 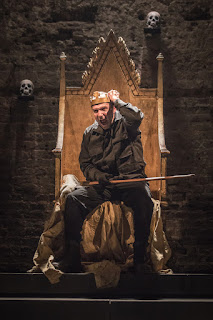 Three and a quarter hours isn't entirely surprising for Shakespeare's second-longest play but it does still make for a tiring evening; at least, after contributing to 2016's least welcome theatrical meme with a late-finishing Uncle Vanya, the Almeida makes amends with an early start time here. Voldemort's Dick is long but not hard-going, and although I've had issues with Fiennes' speaking of Shakespeare before he pitches it right here, managing the shift between charming the audience one moment and getting Hastings and Rivers (Joseph Arkley) to dig their own graves the next. If Richard III is a comedy-horror, Fiennes and Goold skew towards the horror but give the comedy moments to break out as well.

Richard III by William Shakespeare is booking until the 6th of August at the Almeida Theatre (returns and day seats only.)

*which makes more sense than the way it's written, given the amount of years that would have passed by this point, but then you don't go to Shakespeare for historical accuracy.
Posted by nick730 at 23:19