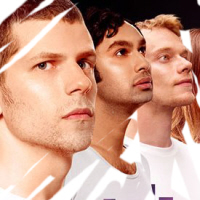 A couple of cases of third time lucky at Trafalgar Studio 1 at the moment: After the vanity projects from Zach Braff and Matthew Perry, a third US star comes to London to write and star in his own play - but actually seems to be doing so on merit this time; and with the Stark family heir and bastard acquitting themselves poorly at theatres just up the road, it's left to the adopted son of that Game of Thrones clan to give a decent stage performance. This time the American actor/playwright is Jesse Eisenberg, who plays Ben in The Spoils. Among the character types that appear frequently in American plays and films is a - usually well-off - New Yorker whose neuroses manifest themselves in a bitterly sarcastic misanthropy and self-destructive streak. Ben is that character turned up to eleven.

Theoretically an aspiring filmmaker but thrown off his course and now doing very little, he lives in a Manhattan apartment bought for him by his father, with Nepalese flatmate Kalyan (Kunal Nayyar,) whom he refuses to take any rent from. 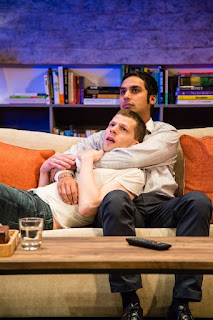 The GoT connection comes in Alfie Allen as Ted, a school friend Ben bumps into and, to his horror, discovers is now engaged to Ben's first-ever childhood crush. He invites Ted and Sarah (Katie Brayben) round and they reignite their friendship, with Ben all the while under the impression that he's going to steal Ted's fiancée from him. It's one of many illusions of entitlement he's convinced himself of, and as he gets disabused of them he reacts in a predictably destructive way. 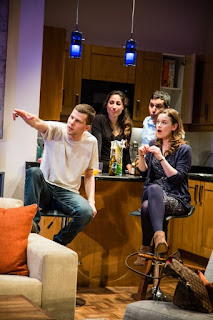 Eisenberg certainly makes a much better case for himself as a playwright than his predecessors; The Spoils is overlong but it's witty and keeps us interested despite the obnoxiousness of its main character. As an actor he also has a part in making this happen, proving that he has a sense of stage performance - there's an interesting physicality to him that's all limbs, climbing up the furniture and fittings of Derek McLane's opulent set (which is a bit too deep for the Trafalgar 1 stage - it pushes the action very far downstage, meaning despite the stadium seating the view is sometimes compromised; from the back of the auditorium the PowerPoint presentations that form a running joke are also slightly obscured by, ironically, the projector.) It means there's moments where we almost sympathise with Ben, although not enough that I didn't find it problematic that Sarah came back to see him after some borderline violent behaviour. 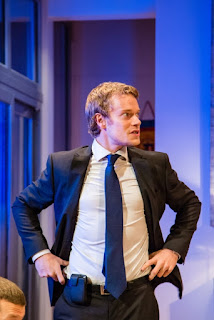 Director Scott Elliott has a cast that provides balance and humanity to counterpoint Eisenberg's petulant lead, Nayyar's easygoing Kalyan caught between the influence of Ben and his girlfriend Rashma, who likes to challenge him to reach his potential in a likeably fiery performance from Annapurna Sriram. Brayben brings more of a girl-next-door quality to Sarah, and while I would have liked to have seen another side of his personality to explain how he holds on to an apparently cut-throat banking job, there's no question Allen's adorkable Ted is another very likeable highlight. Eisenberg throws in one ending too many, and it's a disappointingly cheesy one at that, but for the most part this holds its own with the better offerings in the West End at the moment. Stars may bring new audiences to the theatre but if all they get is the star I wonder how many of them would actually come back; though ticket prices aren't cheap, at least fans of films about Facebook, cock'n'minge-filled fantasy and terrible, terrible sitcoms aren't getting short-changed this time around.

The Spoils by Jesse Eisenberg is booking until the 13th of August at Trafalgar Studio 1.