Will you have infinite knowledge in return for a bit of the old eternal damnation? Ah you will. 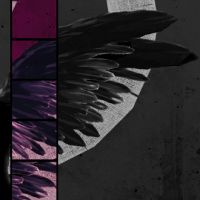 With two plays each over the winter, the Swanamaker is giving William Shakespeare and Christopher Marlowe equal billing this year, and the last of Michelle Terry’s “Ambitious Fiends” is the most ambitious of all (although Macbeth might be the more fiendish) as Marlowe’s Doctor Faustus seeks to gain knowledge – and by extension power – over the whole of creation. Faustus (Jocelyn Jee Esien) is a voracious scholar who, as far as she’s concerned, has exhausted all human knowledge and wants more. The only books left are the forbidden volumes of necromancy, which she uses to summon a demon. Mephistopheles’ (Pauline McLynn) contract specifies that she’ll serve Faustus for 24 years on Earth, in return for her immortal soul. Believing herself to have outsmarted the demon, Faustus takes the deal and begins a journey to learn the mysteries of the universe.

But this original quest for knowledge falls by the wayside as Faustus enjoys the power of having an invisible demon at her command, and passes herself off as a magician who entertains the courts of Europe. As the 24 years pass she has to face the fact that the consequences she signed up for are real. 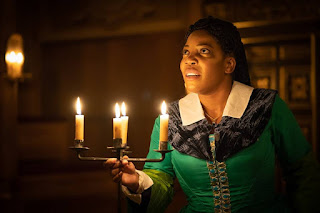 Paulette Randall’s is the first production of the play in the Swanamaker, and while things are kept murky the candlelit playhouse is never dropped completely into darkness as so often happens – possibly because the candles are used as a metaphor for the fires of Hell, and that’s something that’s always hanging over the story. Randall’s gender-switching of the lead roles is done matter-of-factly, the supernatural story outlandish enough for it not to make much difference who’s performing the magic. The only area where it does perhaps add a different perspective is in the revenge plot by Benvolio (Louis Maskell, who turns out to be much sexier when he has a face,) humiliated by Faustus in front of the court and furious at being outwitted by a woman. 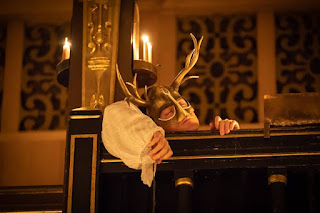 Also gender-flipped is the loyal servant Wagner, here Mandi Symonds as a lady’s-maid and incongruously cheery narrator. At the centre of it all, Esien’s performance is mixed: To start with she plays Faustus oddly blank, which might be an attempt to reflect the blasé way Faustus damns herself (as I’ve probably mentioned before, from her perspective the deal rests on logic so flawed even the play itself points it out, namely that she’s not afraid of the afterlife because she doesn’t believe in it, despite ACTUALLY TALKING TO A DEMON FROM THE AFTERLIFE AT THAT PRECISE MOMENT.) The actual effect is of her not having properly thought this through, and Esien comes into her own more in the second half, as Faustus’ power turns her genuinely unpleasant, her tricks and deceptions largely targeting the poor and unfortunate (although in one of the funniest moments, she gets Mephistopheles to produce grapes for the unsuspecting Empress from her arse; and obviously they target the Pope as well because it wouldn’t be Marlowe if he didn’t attack some Catholics.) 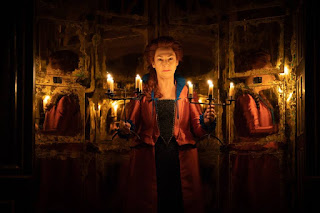 Mephistopheles is often played as a depressed demon who couldn’t really care less what happens to Faustus’ soul but McLynn, a regular at this venue with a couple of villains already under her belt, goes full-pelt for the manipulative tempter who’s impassive to her prey’s face but gleeful at the chance of damning her as soon as her back’s turned. Mephistopheles does of course tell Faustus that she herself is damned by the sheer fact of having seen and lost Heaven, but this becomes less about defining her world view and more about her tricking Faustus by telling her the absolute literal truth, and trusting that her victim will reinterpret it to her own liking (it’s the same technique Faustus herself later uses on the Horse-Courser.) 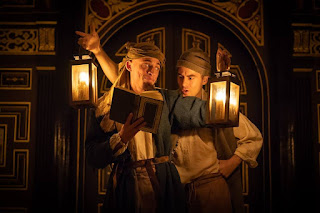 If Doctor Faustus is described as problematic it’s usually in relation to the middle section, that meanders around Faustus’ travels in a mix of styles and tones. Randall lands on a comic tone that dominates much of the play, with some strong performances from the supporting cast in a lot of roles, with Maskell, John Leader, Sarah Amankwah and Lily Bevan’s characters all mounting doomed attempts to give Faustus her comeuppance. If the production doesn’t always cohere it does have a lot of these standout moments, including the pageant of the Seven Deadly Sins presented less as spectacle, more as an atmospheric dance sequence with memorable costumes from Libby Watson. There’s a moment I don’t remember ever seeing being done quite as specifically as this, when Maskell as the Good Angel gives Faustus a glimpse of the Heaven she’s given up to make her damnation all the more cruel, and a finale that uses the chandeliers to create an ominous descent into Hell. Esien might be vague on the reasons Faustus does what she does but she’s clear about the consequences, and an entertaining production leaves a sting in the tail.

Doctor Faustus by Christopher Marlowe is booking in repertory until the 2nd of February at the Sam Wanamaker Playhouse.