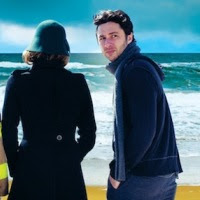 All New People is another of the shows that was running (off) Broadway last summer that I didn't manage to see at the time, but which I've had a second chance at with it arriving over here. I'd have been happy enough if its New York star Justin Bartha had come over with it but for my sister and her flatmate, the fact that its writer Zach Braff has also now replaced him in the lead made it a must-see. And I guess Scrubs must be more popular than I realised because the Duke of York's was packed tonight. Though I avoid reading reviews before seeing a show, headlines are harder to miss and so I was aware of the flood of derision All New People received from the "real" critics. Low expectations can be a good thing though and if Braff's comedy-drama is so slight that it doesn't bear the least scrutiny, it's not without its positives.

As the curtain goes up, Charlie, (Braff) is standing on a chair in the middle of a palatial summer house that doesn't belong to him, a noose around his neck. The unexpected arrival of estate agent Emma (Eve Myles) prompts a bit of physical comedy that sets things off to a flying start but proceedings struggle to live up to it. We're on a holiday island just off Manhattan, in the middle of winter so the place is practically deserted. Still, Emma is not the only unexpected visitor and soon fireman Myron (Paul Hilton) and high-class hooker Kim (Susannah Fielding,) turn up and try to cheer Charlie up with an odd little house party he's by no means thrilled about.

A comedy of mid-30s angst, All New People might give its writer the central role but the best lines belong to the other three, Hilton and Fielding have some show-stealing moments, the latter especially rising above a rather clichéd dumb-blonde role. If the show's box office is depending on star power (I don't think my sister knows the play's title even now, any time I mentioned it in the past she's needed clarifying that we were going to "the Zach Braff thing,") so do a few too many of the laughs, the audience seeming to enjoy a lot of the weaker gags. The lurch towards something more serious near the end doesn't work too well and Braff's rather generic angst is, perhaps more than anything else, what lends the project a feel of self-indulgence.

I also got a tiny bit Annie Wilkes about the use of extensive filmed segments to fill in the characters' backstories, it feels like a bit of a cheat - with film and projection ubiquitous in theatre nowadays it's hard to know where to draw the line but for me this did tip over into not really telling the story through theatrical techniques any more. Still, they do allow for a couple of surprise cameo appearances. I did find it odd that having brought the show to London and cast English actors as Americans, the one English character is played by a Welsh actress, whose accent I found rather strained; but maybe that's just me, as Penny and Amy who were unfamiliar with Myles didn't notice. They were more concerned with the otherwise excellent Hilton's wandering accent, although they did say Myles' was "a bit Bridget Jones." Other than that they generally agreed that the play was fine but nothing special, although they were disappointed that Braff didn't strip to his vest when it looked like he might. (There's rather a lot more flesh on show from one of the aforementioned pre-recorded cameos; without giving too much away, he's long been popular with the denizens of lowculture for his fitness, and his dadness.)

I think All New People would actually stand up quite well on its own merits in a small-scale studio production; a sympathetic audience just about stops it from being completely lost on a West End stage. But I wonder if some of those 2-star reviews from the papers were less about the play itself, more a warning to Hollywood that the West End isn't a dumping ground for vanity projects.

All New People by Zach Braff is booking until the 28th of April at the Duke of York's Theatre.