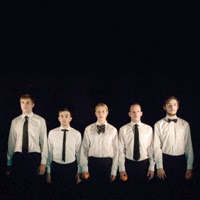 Anthony Burgess' A Clockwork Orange is best-known for the movie adaptation. Not being a Kubrick fan I've avoided the film, although its iconic imagery is of course familiar. I've read the original book (but as I recall I was in hospital at the time, so whatever my response at the time was it's probably not to be trusted.) Andy on the other hand was familiar with the film but not the book, so a good combination as we went in to see Volcano Theatre's adaptation, which has moved into the Arcola's main house. Directed by Paul Davies, the production uses five actors (Paul Coldrick, Kyle Edward-Hubbard, Alex Moran, Mairi Phillips and Billy Rayner) to alternate playing the role of narrator Alex, and those of all the other characters.

Famous for its dystopian ultraviolence, Burgess' use of an invented teen dialect is as much of a feature, and the adaptation doesn't get off to the best start as the actors bark the aggressive patois, and I got the impression we were in for another group of people who think shouting = acting. The storytelling does eventually improve and the slang gets easier to understand as we follow Alex's violent adventures, culminating in his being arrested for murder, brainwashed, and released back into a society he's no longer equipped to survive.

The production is busy and full of ideas, and Andy liked the show. For me though there was, from the start, an unfortunate air of drama school about the whole thing. Although I didn't go to drama school myself, my university drama course had a major practical element, so a lot of acting exercises are familiar to me, and an awful lot of them seemed to crop up in this Clockwork Orange. There's a feeling of the cast ticking off everything they've ever learned (even the dreaded "fall and I'll catch you" trust exercise gets a look-in) and the actors showing off their particular little skills, rather than using them to tell the story. And I'm afraid that for big chunks of the show I was just bored. There's definitely signs of real talent in there as well - I thought Moran showed some real ability in among the showboating, though Phillips and Rayner I found painfully over-earnest. (Again, Andy and I disagreed, he was unconvinced by Moran but particularly liked Phillips; though he did admit it might just be because he enjoys hearing people swear in a Scottish accent.) 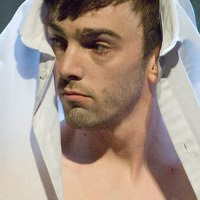 The show does make a big play for my own interests when Alex Moran, who is little, dark-haired and cheeky-faced, i.e. the definition of "my type," spends a lot of time on stage stark naked (though he does go to great effort to avoid the full monty) and these scenes of Alex being rejected by his family also come closest to packing an emotional punch. The show isn't a dead loss, with some interesting ideas sprinkled around, but I would have liked it a lot more if instead of showing us how many theatrical techniques they know for telling a story, the company had connected more with the spirit and horror of the original. And maybe that's ultimately what I found lacking: Perhaps A Clockwork Orange no longer has the full shock value it once had, but it should still be able to evoke some of it. But this version ends up being a technical exercise, not real horrorshow.

A Clockwork Orange by Anthony Burgess is booking until the 21st of April at the Arcola Theatre's Studio 1.