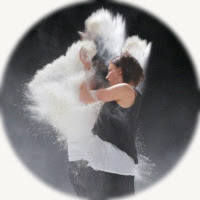 Belarus is the only remaining European dictatorship, and the only European country to still have the death penalty. Belarus Free Theatre is a company performing in exile (an international ensemble, it features at least one French cast member and one American) and in their new show they aim to shine a light on the barbaric nature of modern-day torture and executions, through the medium of wasting lots of food. Trash Cuisine introduces us to the "Capital Punishment Café," where we hear the stories of various executions and tortures from the last half-century throughout the world, to the accompaniment of dance/movement, music and a lot of live onstage cookery. Real meat is chopped up and fried while we hear horrific stories of human mutilations, and human rights abuses from Belarus itself to the massacres in Rwanda, Northern Ireland in the 1970s and the casual approach to capital punishment in those US States that still practice it.

After a brief introduction, we have a chilling opener in which executioners from Thailand and Belarus compare methods of killing while eating strawberries and cream. Even the Thai executioner, though, is horrified by the revelation that Belarus doesn't return the bodies to their families. (This, and the fact that the executions are performed in secret so the families don't even know when/if their loved one has died, is one of the main issues human rights groups are fighting over in that county.) 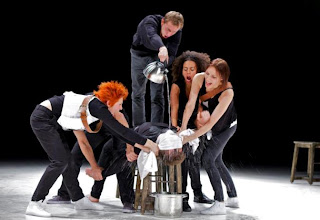 Later we get waterboarding from Northern Ireland as well as both a
SEVERE VADGE WARNING!
and a
FULL-FRONTAL MALE NUDITY ALERT!
as killings are reenacted. There's also an awful lot of nuts of the other kind as well, as part of the foodie theme. 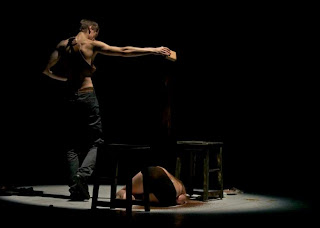 The show is brutal and disturbing, although this is largely down to the original reports of killing and torturing we hear either recorded, or read out by the cast - I'm not convinced the various ways the company present these stories within the restaurant allegory are actually adding much to this effect other than a framing device, and a bit of distance from the horror that makes it possible for the audience to absorb this many appalling stories all at once. There are moments of the blackest humour - like an impressionist who does impressions of the sounds of different execution methods - and this is a physically talented and fearless company. 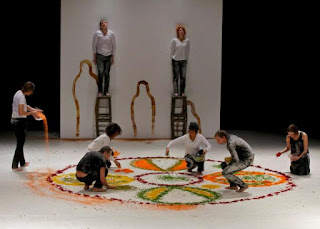 Perhaps personal irritation is why I ended up a bit cool about Trash Cuisine: Sitting in the front row has its risks, but you'd think there'd be at least a bit of warning if the audience is going to end up covered top to toe in flour and chopped onions - you get more warning, and sometimes a plastic sheet, if you're likely to get wet, and that'll just dry off. Maybe an usher on standby afterwards with a clothes brush for those like me whose clothes get particularly dirty? (Thank fuck I hadn't come straight from work in a suit.)

So there's power in this show, but I'm not sure how much of it comes from what the company have done, and how much is the terrifying source material. You'll cry, but mainly because you'll be covered in onions.

Trash Cuisine by Nicolai Khalezin and Natalia Kaliada with additional material by Philippe Spall, Aleh Sidorchyk, Stephanie Pan and Clive Stafford-Smith is booking until the 15th of June at the Young Vic, and from the 19th to the 26th of August at Pleasance Edinburgh.