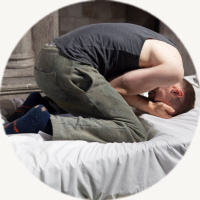 There's not much need to adapt the hospital set from As Is for the Finborough's alternate show this month, as Colleen Murphy's Armstrong's War also features someone ill - although this time there's more chance of recovery, physically at least. Michael (Mark Quartley) is a Canadian soldier recovering from a bomb injury. Between physiotherapy sessions he's pretty much left forgotten in his room, so he's agreed to let a girl guide read to him once a week so she can earn a merit badge. It's a decision he quickly regrets when wheelchair-bound 12-year-old Halley (Jessica Barden) wheels into his room, an onslaught of perkiness reading from her favourite "girl detective" novel to a man who's happiest hiding under the bed, and who occasionally stops to have a chat into thin air with an old army buddy he lost in Afghanistan.

Of course, a mismatched pair in a play can only mean an unlikely friendship is about to be born, but the skill with which Murphy, director Jennifer Bakst and the cast weave it together makes it feel brand new. I'm hard pushed to find fault in Armstrong's War, which over the course of 90 minutes and Halley's six weekly visits never lets up its extraordinarily moving character development. 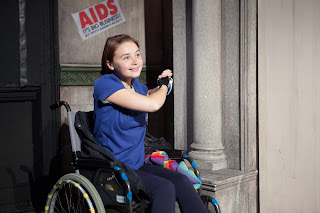 When Halley refuses to give up on her weekly visits Michael asks that she at least read him something about war, and her choice of The Red Badge of Courage sees the two bond over the book and the ways the soldier identifies with its story. It's a sweet and subtly-done development but it turns out to be just a jumping-off point for Michael to pastiche the book's writing style into his own short story that attempts to put to bed his own war damage. 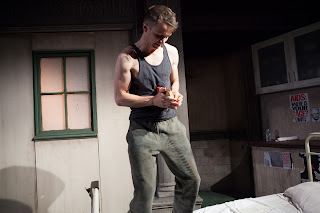 Barden positively glows as the bright-eyed, relentlessly optimistic Halley, while Quartley is just extraordinary as the broken soldier, determined to get battle-fit again and return to the fight. His portrayal both of his PTSD and his way of trying to beat it feel very real. And the play manages to sustain a structure that both uncovers new layers of depth in each of Halley's six visits, and takes the story in a new direction every time. Ultimately though Armstrong's War has a central point to get to, and it's one about hope - which it treats as equal parts vital, and devastatingly dangerous. 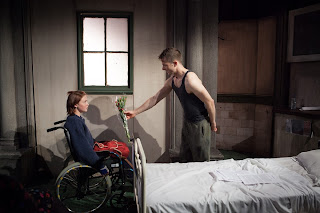 It seems criminal that Armstrong's War is only getting 9 public performances in the Finborough's Sunday-Tuesday slot. This is actually billed as simply a workshop prior to its official premiere in Canada, but I can't see how it can be better served than by Bakst's effortlessly moving production. Let's hope it returns to London for a proper run, and brings this outstanding cast back with it for more people to see.

Armstrong's War by Colleen Murphy is booking in repertory until the 27th of August at the Finborough Theatre.