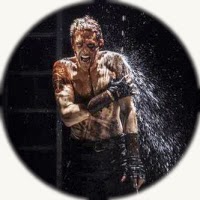 "Tom Hiddleston showering on stage." According to my blog stats, I've already been getting hits from people Googling that phrase long before I even saw the show. So there you go, at least now those people will actually find something for their troubles. Yes, Hiddles does take a shower on stage, although it's more like a quick splash. Calm down, he doesn't even take his trousers off, it's not like he's getting his Coriolanus bleached. He does also share a kiss with a man, but that's more of a quick peck on the lips than anything to get the Internet too moist in the gusset. But if these two headline-grabbing moments are nothing much to write home about, it's fortunately because they're throwaway elements of a solid production, as Josie Rourke tackles a simply staged but interesting Coriolanus.

Caius Martius (Hiddleston) is a much-decorated Roman soldier, whose virtually single-handed sacking of the city of Coriolis earns him the honorific surname Coriolanus. His feats of bravery almost automatically entitle him to a place in the Senate, but there's a couple of formalities of Roman democracy to be dealt with first. Even a symbolic show of humility towards the Plebeians is more than he can manage though, and soon he's gone from hero of Rome to exiled enemy. 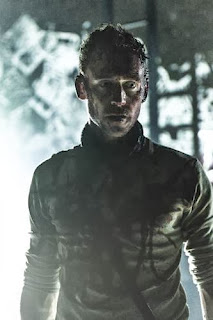 I was a bit apprehensive going into this, not only because I've found Rourke's tenure at the Donmar so far patchy at best, but because I was unconvinced by Hiddleston's Hal/Henry in The Hollow Crown. But if he never got the complex soldier king down, he's much better here as the dangerously-focused warrior who's a born soldier but a catastrophically bad politician. Or maybe not so much a born soldier as a bred one, because one thing that's brought to the fore in Rourke's production is the Roman culture of fetishising military glory, something that's made particularly clear in the scene of his mother Volumnia and mentor Menenius almost getting off on listing Coriolanus' wounds. 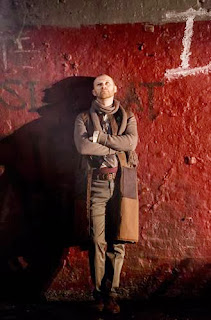 Mark Gatiss' Menenius is a character much respected for his quiet wisdom but one who from the off suggests this is undeserved, his reading both of Caius Martius' personality and the way he himself is viewed by him, dangerously off. Birgitte Hjort Sørensen as Coriolanus' wife Virgilia projects a constant quiet despair at the constant physical danger he puts himself in. But it's Deborah Findlay's Volumnia who steals the show, the powerful embodiment of Rome's martial culture, which only makes it all the more dramatic when she finally falls to her knees to beg her son's mercy. 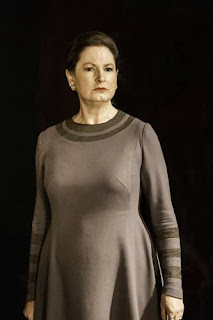 Elliot Levey's Brutus and Helen Schlesinger's Sicinia, the senators who help turn the public against Coriolanus, are here rather unambiguously portrayed as shit-stirrers with a personal dislike for him; meanwhile Hadley Fraser as his nemesis-turned-ally Aufidius plays up the infamous homoeroticism of their relationship. And Alfred Enoch is there too, looking as awkward on stage as ever, which I've decided is down to his "resting" face looking permanently startled, but which Weez put down to his neck being the same thickness as his head. 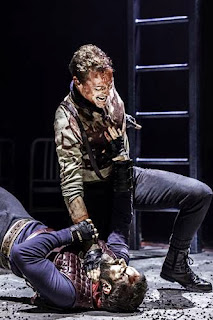 Lucy Osborne has gone for a stark design centred around a ladder disappearing up into the flies, augmented by busy, graffiti-themed projections from Andrzej Goulding, which are at times distracting but at others help give the impression of the angry public opinion that will prove Coriolanus' downfall. Shakespeare's Roman plays have, I find, a tendency to appear action-packed in theory but turn out to feature a lot of talk in practice, and with its numerous behind-the scenes discussions of how Caius might get the public back on his side, Coriolanus definitely fits this bill. So it can be a tricky one, and I've seen it become painfully dull before, but Rourke's production manages to keep the impetus going throughout. And there's even a man strung up by his ankles, fitting nicely into one of 2013's recurring theatrical memes.

Coriolanus by William Shakespeare is booking until the 8th of February at the Donmar Warehouse.