Theatre review: Eye of a Needle 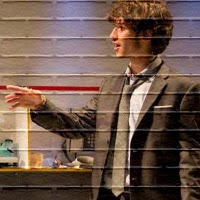 This August has been a decent month for gay-themed theatre, and it's rounded off at Southwark Playhouse by Eye of a Needle, a dark comedy about asylum-seekers. Chris MacDonald's story makes points that could apply to people fleeing a number of dangers, but it focuses particularly on those seeking safety from countries where gay people are persecuted. Laurence (Nic Jackman) works at UK Immigration Control, assessing cases for entry to the UK, but with a barely-concealed directive from above that as many as possible be refused. With the sometimes manipulative intervention of his boss Ted (Stephen Hudson,) we see him deal with frightened Jamaican Harrison (Ekow Quartey,) but the person who really gets his attention is Natale (Ony Uhiara.) A vocal gay rights campaigner from Uganda and targeted by the press, her no-nonsense arguments and fearless comebacks make him pay attention to the persecution he deals with daily, in a way he hasn't before - and she's not above taking advantage of his obvious attraction to her.

The media's narrative on immigration would suggest an unstoppable tide of immigrants, but Eye of a Needle presents an overworked, underfunded bureaucracy under active pressure to turn people down - a year into doing the job, Laurence doesn't realise that approving an application is even an option.

In an assured full-length playwrighting debut, MacDonald presents the absurdity and pressure of the system but wraps it in an entertaining couple of hours as the characters clash, the scenes between Laurence and Natale filled with snappy dialogue. Initially quite unlikeable, Laurence is in the job because he can't get anything better and is prone to coming into work hung over if not still drunk from the night before; his revelation of the consequences of what he does humanises him, but MacDonald doesn't let any of the characters become caricatures - Ted could be a straightforward villain, automatically turning people down and potentially condemning them to death when they return home, but Hudson shows the pressure he's under and the emotional toll it takes. 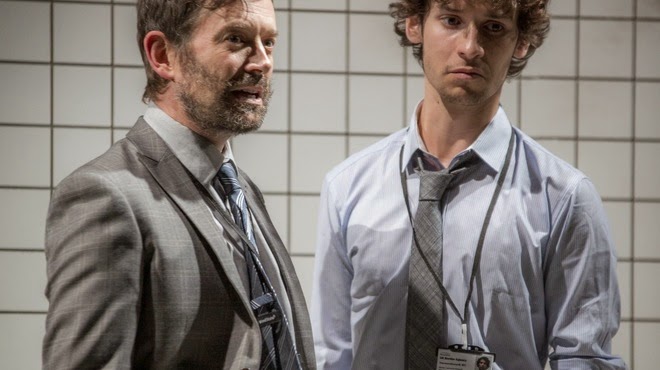 Quartey gets to display some range as a variety of applicants, Harrison's traumatic experience balanced by a comic opening where a blatant fraud protests too much - the scene does though set up the play's ongoing theme of how impossible it is to provide hard evidence of one's sexuality in the best of circumstances, let alone after a life of trying to conceal it. Fly Davis' oppressive traverse design suggests a soul-sucking environment but Holly Race-Roughan's production keeps the energy up with John Tiffany-style dance/movement sequences between scenes. Overall Eye of a Needle manages the tricky balancing act of providing an entertaining, darkly funny evening without diminishing the seriousness of its subject.

Eye of a Needle by Chris MacDonald is booking until the 20th of September at Southwark Playhouse's Little Theatre.