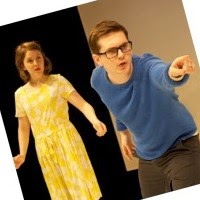 Philip Ridley's latest play brings together plenty of people who've worked with the playwright before: Sean Michael Verey starred in Moonfleece, Amanda Daniels was in Shivered, and most recently Gemma Whelan soloed Dark Vanilla Jungle. Director David Mercatali, meanwhile, is one of Ridley's most regular collaborators. They come together for a play that, in its use of language and twisted fairytale, is unmistakeably Ridley's, but stylistically feels like a departure: Radiant Vermin has the stripped-down theatricality of Tender Napalm, but with a frantic vaudeville comedy style. This is why I think the use of actors he'd worked with before was significant - I don't think Ridley could have written the play quite like this if he didn't know he had actors who could handle it, particularly Whelan and Verey who have to carry most of the show like the world's most sinister comedy double act.

If I've not said much about the show itself yet it's because I think it's best going into it with as little knowledge of the plot as possible. If you're planning on seeing this show - and if you generally share my taste in theatre you really should - I'd suggest you come back and read the rest of my review after you've seen it, because from the next paragraph on there's spoilers. 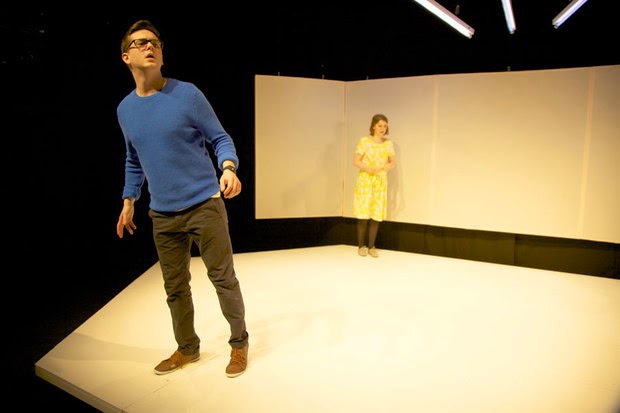 Reviewers have tended to describe the deals people have made to get their own home in Game and Deposit as "Faustian pacts," but you can trust Philip Ridley to do the same thing in a much more literal way. Jill (Whelan) and Ollie (Verey) are a young couple expecting their first child, living on a notoriously dangerous and depressing estate, when a letter from the mysterious Miss Dee (Daniels) offers them a home of their own. It's a run-down home, granted, and not in the best area, but the deal is that they can have it for free as long as they carry out major renovations themselves and decorate it tastefully. Seeing the potential, people will want to do the same to the surrounding homes, and the whole neighbourhood will soon become gentrified and shoot up in value. 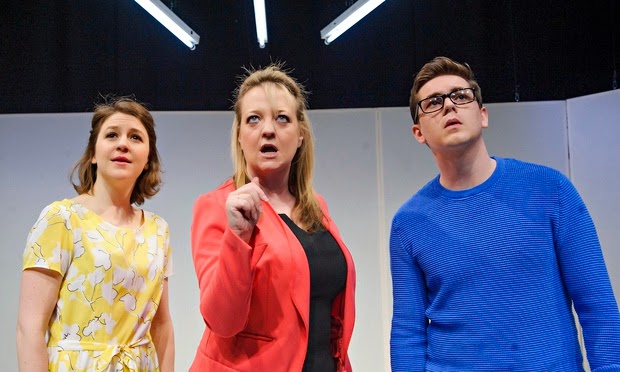 The supernatural twist is the way in which these home improvements will take place: When a homeless man breaks into their kitchen and is accidentally killed in a scuffle, his body disappears 66.6 seconds later in a flash of light, turning the room into a fully-stocked kitchen straight out of a show home. It's not a one-off, and soon Ollie is bringing vagrants - now renamed "renovators" - back home regularly, to murder them and have them "reincarnated" as perfectly-decorated rooms Jill has seen in magazines.

Daniels makes brief but significant appearances as Miss Dee as well as playing one other character (...or does she?) but most of the show is given over to the couple, whose saccharine exteriors - Whelan is a housewife straight out of a '70s sitcom, Verey channelling Frank Spencer - are a perfect vehicle for some incongruously pitch-black comedy. 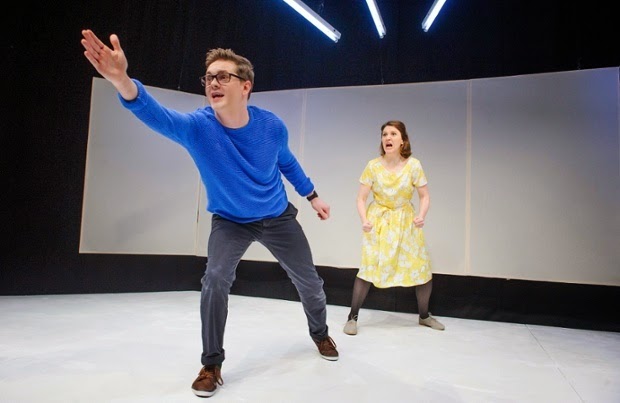 The targets of Ridley's satire are always clear - not just gentrification and the need to metaphorically sell your soul to get onto the property ladder, but also the sacrificing of society's weakest to make life more comfortable for everyone else, and the ease with which good intentions can turn into justifying the worst behaviour - but it never lets the energy and humour of the narrative take second place.

There's a reason Ridley is an almost-permanent fixture on my annual Top Ten lists, but he's usually backed up by strong casts and creatives as well, and never has it been more obvious. Radiant Vermin is an angry political play wrapped up in a jaw-droppingly audacious comedy, Verey and Whelan providing the best comic performances you'll see in London right now. Their climactic "birthday party from bloody hell" should be borne in mind as a yardstick the next time a reviewer reaches for the overused phrase "tour de force," but long before that - maybe twenty minutes in - I was already mentally figuring out if I've got time to pay the show a repeat visit.

Radiant Vermin by Philip Ridley is booking until the 12th of April at Soho Theatre.