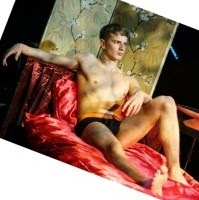 Snatching Romeo & Juliet's crown as the most nipple-thrusting show in Southwark, Closer to Heaven is the latest in the Union's attempts to turn West End flops into fringe hits. This one certainly seems to have done the trick, the Jonathan Harvey / Pet Shop Boys musical sold out long before it had even opened. Recent "Irish" arrival Straight Dave (Jared Thompson) is so called because he really is straight, but he does seem a bit insecure in his sexuality, possibly because of all those men he turns out to have slept with. He tries to suppress this side of himself in the most masculine job he can think of, as a go-go dancer in a gay club, while dating Shell (Amy Matthews) daughter of club owner Vic (Craig Berry.) Vic is variously a heavy drug user or violently opposed to them depending on the scene, which makes for a tricky relationship with resident rough trade and drug dealer Mile End Lee (Connor Brabyn - I see the project to clone Ryan Phillippe has been successful.) Straight Dave visibly drools any time he sees Lee, then is confused when people ask him if he's gay.

Jonathan Harvey is one of those writers whose work can vary wildly in quality - Beautiful Thing still feels like a classic, but presumably one night he rolled over onto his keyboard in his sleep, and the result is the book of Closer to Heaven. 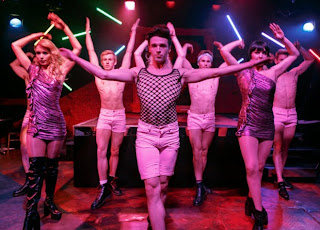 Fortunately we're very much in "so bad it's good" territory, which the high-camp setting doesn't hurt with. Harvey went on to become head writer on Coronation Street, which perhaps shows in the fact that the musical has about a year's worth of torrid soap plots crammed into it. As well as Dave juggling two romantic storylines there's a number of drug users falling on and off the wagon, and Shell's instant new connection with the gay dad she hasn't seen for 15 years. Also, Straight Dave is attempting to get into a boyband run by sleazy producer Bob (Ken Christiansen,) before finally deciding he can find fame his own way. Which is something of a confusing character journey, seeing as how he never wanted fame in the first place, and only auditioned for Bob as a favour to Shell, who was working for him in some unspecified way, but doesn't seem to be any more by the end of the show. There's basically so many plots going on that - SPOILER ALERT! - Harvey has to resort to the classic ending of killing off one of the characters and assuming that everyone sorted themselves out in the wake of that. 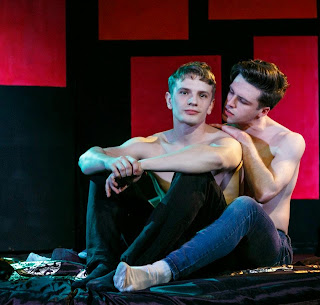 So, admittedly, not all of the show's fun comes for the right reasons. I may also have snorted with laughter a bit louder than intended when Dave said people like his accent "because of the novelty." Mainly because of how accurate the statement was - I know I've never heard anything quite like it before. But musically Neil Tennant and Chris Lowe's contributions are a lot better - their attempts at torch songs fall flat, but the songs that are more recognisably Pet Shop Boys are a lot of fun, like the big company number "Shameless" and Bob's "Call Me Old Fashioned" (which is a lot like their version of "Go West.") 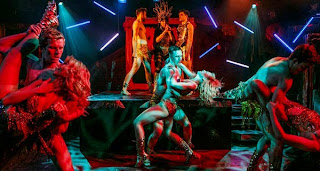 One of the highlights of Gene David Kirk's production is Philip Joel's choreography, performed by a talented and sexy, if possibly a bit confused, chorus. (One of the girls spent a hell of a long time angrily waving her buttocks in my direction in the apparent belief this might get some kind of response. I can only imagine nobody's told her what show she's in.) Katie Meller is also good value as the club's hostess, '70s throwback Billie Tricks. Even in a railway arch Closer to Heaven's faults feel painfully exposed so it's no surprise it never lasted on a bigger stage. But there's enough positives here to make those faults matter a bit less.

Closer to Heaven by Jonathan Harvey and Pet Shop Boys is booking until the 23rd of May at the Union Theatre (returns only.)