Theatre review: You For Me For You 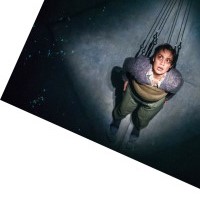 Junhee (Katie Leung) and Minhee (Wendy Kweh) are literally starving, but to admit anything was less than 100% perfect in their lives could invite even bigger problems. That's because Mia Chung's You For Me For You takes place in North Korea, and the walls, and maybe even the trees, have ears that could get them reported if the sisters deviate from the script that says they live in The Best Nation in the World. Minhee always seems to trick her younger sister into eating what little food they have, meaning she herself is becoming very ill, so Junhee hatches a scheme for them both to escape the country. But as the Smuggler (Andrew Leung) helps them flee the reluctant Minhee falls down a well, and Chung's already quirky story becomes an Alice in Wonderland fantasy of East, West and two very different paths in life for the two women.

What is 24 hours for Minhee down the well becomes several years for Junhee. The Smuggler tells her only Americans are crazy enough to go back to North Korea, so her only hope of coming back to save her sister is to go to New York and become a real American. 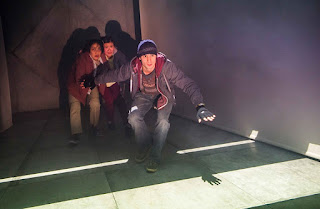 So we follow Junhee's journey to America where she gradually becomes accustomed to life there and eventually fits in perfectly - even needing a therapist by the end - while also keeping a certaain suspicion of Western excess. She has a sweetly awkward romance with Wade (Paapa Essiedu,) while Daisy Haggard threatens to steal the show as every American woman she meets, all called Liz: The way her lighting-fast gibberish gradually turns into English over the course of the show, as Junhee starts to understand the language, is beautifully done. 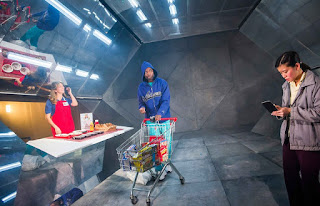 Meanwhile her sister's journey is all in her own mind: Stuck at the bottom of the well Minhee goes on a search for her long-dead son in a fantasy world where bags of rice sing to her, and Kwong Loke and Andrew Leung multitask as various odd characters helping her, or officials getting in her way. Chung's play, done with a light touch in Richard Twyman's energetic production, beautifully portrays North Korea as a Kafkaesque world of surreal laws run and changed at the whim of a distant dictator, while suggesting that Americans might not enjoy quite as many more freedoms as they like to think. 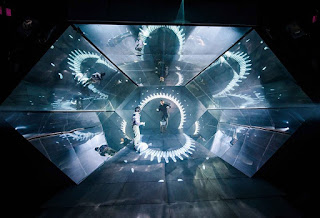 Jon Bausor's mirrored hexagonal set is another undoubted star of the show, a kaleidoscope immersing the actors in Tal Rosner's projections, but I also loved the amount of trapdoors and tricks hidden in its walls, and the way the mirrors distract from the way it uses perspective: It narrows at the back, meaning actors appearing upstage look gigantic, an effect Twyman uses at well-chosen moments to ominous effect. There's also a simple but very effective coup de théâtre showing Minhee at the bottom of the well. 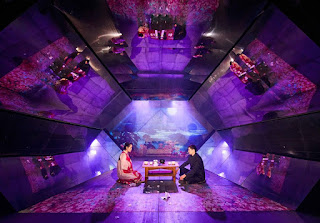 Chung acknowledges that her play deals with a mysterious and most likely bloody dictatorship - Minhee's mental journey includes her meeting her long-absent husband (another of Andrew Leung's roles,) who lists a number of sticky ends he might have come to. But for the most part she looks at the subject with a light touch, the fact that so little is known about life in North Korea allowing her to turn it into flights of fancy. It's a surprisingly charming play with story, production and performances all hitting the mark to make for something really special and memorable.

You For Me For You by Mia Chung is booking until the 9th of January at the Royal Court's Jerwood Theatre Upstairs (returns and day seats only.)