Theatre review: The Trackers of Oxyrhynchus 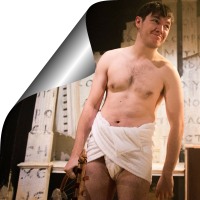 Whatever else I might have to say about it, there's something to admire about a play that's had to stick a note on the doors of the pub below, apologising for the noise. Still, there's also good reason to be apprehensive about any play by Tony Harrison, a poet whose Fram still gives its name to one of the less flattering of my annual awards. But a much shorter running time makes it worth risking when he's attempting something that anyone interested in Ancient Greek theatre will want to see: I've often heard of the satyr plays that would provide the comic relief after a day of full-on tragedy, but I don't know much about them - probably because to the best of my knowledge only one survives. The Trackers of Oxyrhynchus is Harrison's attempt to recreate one of the lost satyr plays.

His framing device is of academics in Egypt trying to salvage papyrus that the locals were going to use as fertiliser. Grenfell (Tom Purbeck*) is convinced there's a Sophocles satyr play in there somewhere. 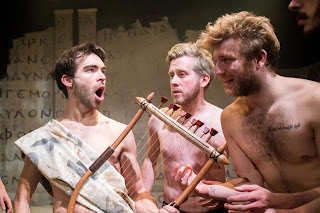 But all they find is letters from the poor, begging their landlords not to throw them out, and Grenfell becomes increasingly angry - possibly because he's being possessed by Apollo, who eventually takes over his body to recreate the play himself. It tells the story of how the newborn Hermes (Dylan Mason) stole Apollo's prize cattle, and the elder god employed Silenus (Richard Glaves) and his family of satyrs to find the herd. It turns out Hermes has turned them into a lyre, which Apollo reclaims, thus becoming the god of music we're familiar with. But in the process he claims total ownership of the arts, banning the satyrs who helped him - and who until then had been the voice of music and dance in Greek theatre - from ever making music again. 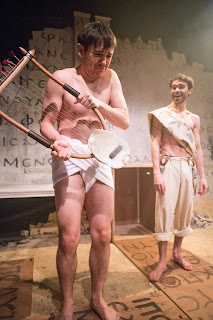 Built around a chorus of drunk, topless goat-men with comedy erect cock-and-balls on display‡, The Trackers of Oxyrhynchus was always going to be a bit on the eccentric side. Jimmy Walters' production makes a decent stab at it - there's a bonkers joyousness to using tap shoes to represent the satyrs' goat hooves (and they're the reason for that noise warning downstairs as the chorus spend 15 minutes enthusiastically clomping around the stage.) The cast are game and generally strong⁂, with Glaves particularly good in his dual roles when the play-within-a-play mirrors its framing device: Purbeck, whose Grenfell is racist and contemptuous towards their Egyptian workers, becomes the arrogant and dangerous Apollo, while Glaves as his more empathetic colleague Hunt becomes the lead satyr who sees his people cast out of their place in the world. 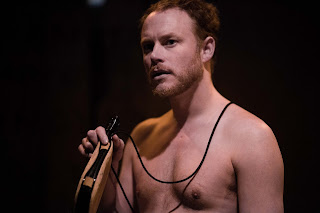 But not all the weirdness is of the endearing kind and a play that bills itself as tragicomedy has a lot of trouble reaching that tone - the first half is the comic half but the inventive production and performances struggle against a script whose rhyming couplets rarely actually include an actual joke. It then lurches abruptly into bleak social commentary, Harrison using a typically grotesque twist in the myth to turn the satyrs into metaphors for the modern dispossessed. He's not a writer to labour a point twice when he can labour it seven times, so some actually quite interesting parallels end up getting run into the ground. (It's also pretty inconsistent: If it's ultimately the story of Apollo trying to erase all memory of the satyrs, why is he so desperate for it to be told again?) I can see what the writer was trying to do but his usual heavy-handed approach gets in the way - reconstructing this lost genre is an interesting idea but apparently there is one extant Euripides satyr play, so that's what I'd like to see revived next.

The Trackers of Oxyrhynchus by Tony Harrison is booking until the 28th of January at the Finborough Theatre.

*formerly Tom Byam Shaw. Loads of actors seem to be changing their stage names at the moment, which is playing havoc with my blog tags. I'm not going to go back and re-label old reviews so I'll just keep using the original tags for now.

‡well, they're supposed to be erect, but there's only so much you can do with cuddly stuffed genitals (presumably all part of Philip Lindley's remit as designer,) especially the more generously endowed ones. On the other hand the smaller ones can be more naturally perky. As anyone familiar with the Warwick Rowers' œuvre will know.

⁂although without naming any names, it's sometimes a good idea to have a look around and see what kind of level the rest of the chorus are working at, in case you end up pitching your performance, and particularly your facial expressions, that liiiitle bit broader than everyone else.
Posted by nick730 at 22:08