Theatre review: Guards at the Taj 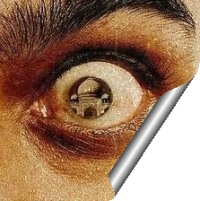 The Bush has just reopened after a major rebuild of its new building, that comes with reserved seating and new separate entrances for the box office, auditorium and toilets, which should hopefully all add up to a less nightmarish time in the bar area. It looks nice enough, although let's hope Madani Younis doesn't have any ideas about it being the most beautiful theatre there ever was or ever will be - if Guards at the Taj is anything to go by I'd hate to think what he might do to the builders. Rajiv Joseph's play takes its theme from a popular myth about the building of the Taj Mahal: Over the 16 years of its construction it was hidden behind temporary walls, and only its architect and the men building it were allowed to see it before it was finished, on pain of death to anyone who snuck a look. Joseph sets his play on the night before the unveiling, with Taj Mahal out of bounds for a few more hours.

Humayun (Danny Ashok) and Babur (Darren Kuppan) are on guard for the dawn shift, childhood friends who, despite Humayun's father being quite senior in the military, are themselves still very junior, and given unpleasant jobs like this one - being the only guards facing away from the marvel of the age. 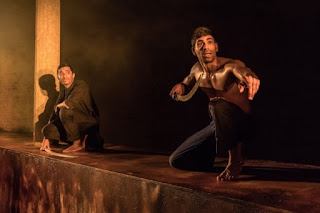 Humayun is a bit more serious, Babur a bit more of a joker and rule-breaker, and in the opening scene the play carries echoes of Waiting for Godot and Rosencrantz and Guildenstern Are Dead - two nobodies discussing a world they only see a sliver of, sharing dreams and fantasies with a few predictions of a world centuries into their future for good measure. I found it more entertaining than either of those plays though, and it soon goes into very different, and darker territory, as the discussion of the new building's beauty turns into the reality of creating and claiming ownership of that beauty. 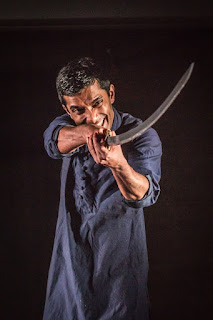 I've never been to the Taj Mahal and if I did now I think this play would be hard to shift from my mind, even if the horrors in it aren't entirely based on fact.The building is famously a memorial to the Emperor's dead wife but Guards at the Taj reminds us it's also a demonstration of power, and how beauty and power become intertwined - the Emperor wants to ensure that nobody else can ever outclass him by building something of similar beauty. This bodes badly for everyone involved in its creation, and the hapless Humayun and Babur ends up being the instruments of this brutality. Once again a distant past feels uncomfortably relevant as dictatorships start to feel like the global norm, and a prime minister calls an election on the basis that nobody should dare to oppose her - Joseph reminds us of how no part of life is out of their control when one person has the last say on everything. 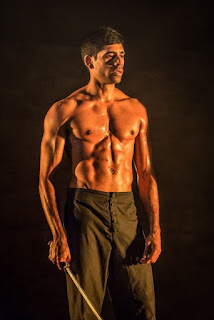 So there's elements of the story that are bleak, and it's most certainly bloody, but Jamie Lloyd continues this year's good work of returning to a more intimate scale, helping Ashok and Kuppan make believable and likeable characters who propel the piece forward with a sense of urgency. Soutra Gilmour's set is dirty and oppressive with plenty of drainage for an awful lot of blood to be got rid of; but in conjunction with Richard Howell's lighting it also makes for a lot of beautiful visuals (I don't just mean Kuppan's insane torso.) So it's very well on-theme for a play that looks into such stark contrasts of the blood behind the impressive façade, but does so with a humanity and humour that remain even as things are at their darkest.

Guards at the Taj by Rajiv Joseph is booking until the 20th of May at the Bush Theatre.