Theatre review: The Lieutenant of Inishmore 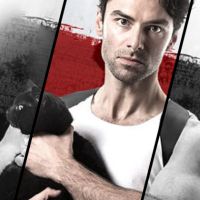 It’s starting to look like 2018 might be the first year I don’t see Damien Molony on stage since I started this blog; instead it’s his Being Human predecessor who makes his West End debut in The Lieutenant of Inishmore. And while I guess Poldark fans probably make up more of the audience, it’s those of us who are used to seeing Aidan Turner covered in blood who’ll be most at home here. We first meet Turner’s Mad Padraic when he’s torturing small-time drug dealer James (Brian Martin,) stringing him upside-down from a meat hook and asking him to choose which nipple to lose. A nationalist considered too crazy even for the IRA, Padraic has joined splinter group the INLA instead, and has spent the last year travelling around Ireland, blowing up chip shops (they’re not really a legitimate political target, but they’re much easier to infiltrate.) James’ nipple is saved at the last minute by a phone call from Padraic’s father.

Donny (Denis Conway) has called to say that Padraic’s beloved cat is poorly, and his son hurries home; but it’s not the full story. Wee Thomas was found dead in the road with his head caved in, and Donny is just trying to break the news to his psychotic son gently. 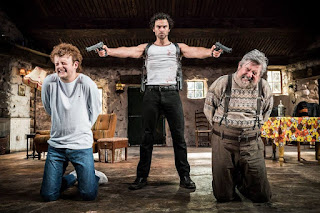 Donny is quick to blame gormless teenage neighbour Davey (Chris Walley) for running the cat over with his bike, but it was actually Padraic’s fellow INLA man Christy (Will Irvine) who wants to lure him home and kill him. The original RSC production of The Lieutenant of Inishmore was the first Martin McDonagh play I saw, and its pitch-black comedy and gore-covered stage definitely made an impression so I’d been looking forward to seeing Michael Grandage’s revival. Irish terrorists may no longer be the bogeyman they were in 1993 when the play is set, but politics in the last few years has proven that its satire on nationalism remains relevant. 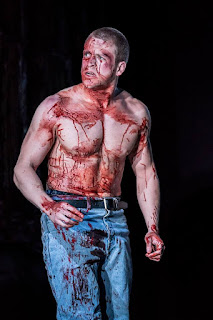 More importantly, the play’s comedy and shock value haven’t diminished either. McDonagh has a signature dialogue style of exaggerated Irish dialect that means not many lines go by without a good gag, and his supporting cast of characters have broadly-drawn quirks, like Christy’s henchmen – the dim-witted Joey (Julian Moor-Cook) and pedantic Brendan (Daryl McCormack.) Meanwhile the fact that Padraic is so violent no amount of pleading is likely to save his victims means they tend to give up trying and just get bolshy with him, so we regularly have people nit-picking everything he says in the middle of him torturing them. The gently surreal setting constantly being interrupted by the Bonnie and Clyde rampage from Padraic and his new sidekick Mairead (Charlie Murphy) gives the play the feel of a Father Ted episode that’s gone horribly wrong. 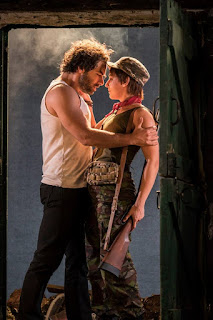 Turner has chosen well in a fun lead role that sees him turn on a sixpence between psychotic violence and sobs at the thought of anything happening to his cat, while McDonagh’s play ploughs ahead through its comic setpieces, largely involving Donny and Davey stuck in the middle of the chaos – from putting boot polish on a ginger cat so it can impersonate Wee Thomas, to chopping up bodies once Padraic’s had a killing spree. The Lieutenant of Inishmore’s satire on the people who use a sentimental attachment to their country as an excuse for the dark things they want to do anyway still comes through clearly, but on top of that is what’s most of all a sometimes painfully funny evening.

The Lieutenant of Inishmore by Martin McDonagh is booking until the 8th of September at the Noël Coward Theatre.