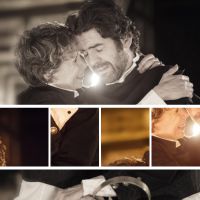 Michelle Terry’s summer season at the Globe was the first time the venue didn’t have an official overall theme for the year, but for her first winter at the Swanamaker she has two: She’s split her season into two themed “festivals” starting with “Ambitious Fiends,” looking at power and corruption, with an optional supernatural element. That option is taken and really played with in the opening production: The candlelit playhouse has been open for a few years now so I find it a bit surprising that this is its first Macbeth, a play thought to have been written with this kind of theatre in mind. Indeed, given it’s notoriously an enthusiastic rimjob on James I, there’s a popular theory that the mirror that displays the line of kings in Act IV scene 1 would have once ended up reflecting the actual king in an intimate setting. Robert Hastie doesn’t have any royalty to play with, unless you count the theatrical royalty of Terry herself as Lady Macbeth, with real-life husband Paul Ready as her on-stage husband.

He’s a loyal officer of King Duncan (Joseph Marcell,) rewarded for his service with the Thaneship of Cawdor when the incumbent is executed for treason. This honour confirms the prophecy given to Macbeth by three witches on the battlefield. 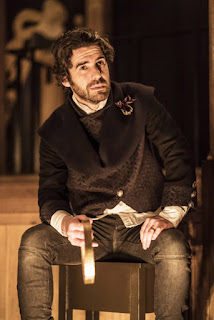 But there’s a further element to the prophecy, which would see Macbeth go on to become the next king of Scotland. When he tells his wife about it they egg each other on to give destiny a leg-up, by murdering Duncan and taking his throne. The Globe describes this as timely; maybe they mean in the sense of mediocre white men ending up with way too much power, as Ready’s Macbeth is more civil servant than fearsome warrior. Rather than being gripped by ambition, he almost logics himself into regicide, figuring it out as the most direct route for the prophecy to come true. It’s sharing these thoughts with Lady Macbeth that ends with them goading each other into doing it for real, and the way their own actions overtake them leads each into their own type of madness. 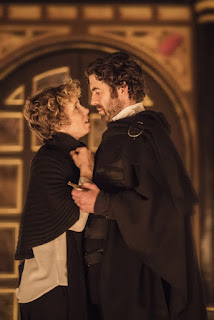 Having a real-life couple playing the Macbeths has inevitably drawn a lot of attention to their chemistry. What they share in their on-stage relationship is a down-to-earth feel, a determination to make this feel like they’re just thinking the words up as they’re saying them –they both pause to mull over the best word to use, and repeat themselves as if going over the ramifications of what they’ve just said. It’s a contrast to Terry’s other role as one of the witches, whose lines have a dispassionate, almost bored approach to the carnage she’s casually causing. In his debut as First Lady of the Globe, Ready isn’t afraid to play the comedy in how banal some of Macbeth’s statements become as his world starts crumbling – a tricky approach in a play whose tone is easy to get wrong, but one that works for his interpretation of the character. 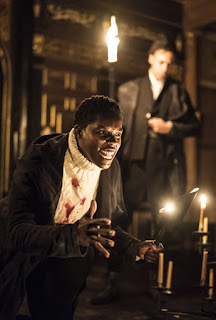 It’s admittedly not hard for Hastie’s production to be the best Macbeth in a year full of them – Polly Findlay had dozens of good concepts but couldn’t pick which one to go with, while Rufus Norris absolutely did pick a concept, which was for it to be unwatchable. Hastie does of course have the advantage of an atmospheric space, and exploits it to play up the creepiness of the supernatural elements. When talking about the Swanamaker the lighting is always mentioned, and Hastie keeps things shadowy, with figures popping up from the corners and some scenes lit by a single candle, like Katie Mitchell would do if she were directing a show at the Albert Hall. But what feels like a fresh take on the space is the use of sound: In Macbeth’s second meeting with the witches, the apparitions are invisible to the audience, Ready following the tapping noises and voices coming from under the stage. But sounds and voices come from the trapdoors and corridors throughout, adding a horror movie touch as you start to question whether you just heard a sigh or whisper come from behind you in the claustrophobic space. This is all on top of the eerie chanting that makes up Laura Moody’s score. 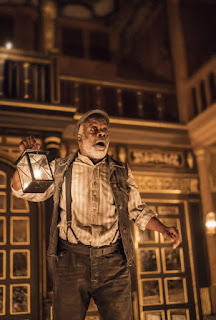 Between this play and this space, the monochrome of Peter McKintosh’s modernish-dress costumes feels a bit of a cliché, and the small cast’s doubling is sometimes a bit awkward – Marcell turning up as the Porter seconds after his Duncan’s been murdered comes across as an unintentional gag. But there’s other notable moments, not least of all Anna-Maria Nabirye’s Macduff being totally nonplussed in the English court scene by Malcolm’s (Kit Young, typecast as That One Who Turns Up At The End Of The Shakespeare Play And Takes Over) contradictory speeches. Tonight Matthew Romain confidently covered the role of Banquo (it’s been suggested to me that Philip Cumbus, who usually plays him, might be on paternity leave, which would explain why Romain was off-book and fully-rehearsed in a theatre that doesn’t normally carry understudies.) 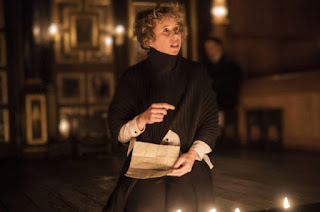 Maybe this isn’t a Macbeth for the ages – as with most shows at the Swanamaker it’s a fairly straightforward telling of the story – but neither does it gets tripped up by the play’s many potential pitfalls. The touches of horror are done in an effective way that gives the show its own flavour, while the casting of a real-life couple as the central pair is used to subtle effect.

Macbeth by William Shakespeare is booking in repertory until the 2nd of February at the Sam Wanamaker Playhouse.