TV review: Talking Heads - A Chip in the Sugar /The Outside Dog / Bed Among the Lentils 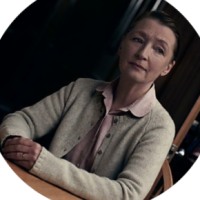 It's hard to separate Alan Bennett's Talking Heads from their original performers but my next selection of remakes sees their actors put a new stamp on them. In among the collection of current and future dames each of the two original series had one male monologue, and the original series opened with Bennett himself in A Chip in the Sugar. So if any piece is associated with the writer's distinctive voice even more than the others it's this one, and Martin Freeman is the actor taking on the role of Graham for director Jeremy Herrin. Like most of the actors in this remake Freeman isn't trying too hard to emulate the original accent, which might lose something in authenticity but helps avoid too many direct comparisons. Graham is a closeted middle-aged man who lives with his mother, having had trouble living alone in the past due to paranoid schizophrenia. He's now on medication but his mother's chance meeting with an old boyfriend from her youth unsettles his routine and he starts to think the house is being watched again; except maybe this time it actually is.

With gentle comedy playing around the edges of a story of mental illness this is the archetypal Talking Heads, and leaves you guessing about who to sympathise with - Graham clearly bristles at any suggestion of his mother having independence and a life outside him, but you can understand why the racist, sneering Mr Turnbull gets his back up. A Chip in the Sugar isn't the most emotionally devastating monologue of the series but it's gently absorbing; my one big distraction in the remake was Freeman's wardrobe - what, didn't the Eastenders complex have something that matches Graham a bit better? Freeman might not be kitted out in the latest styles but his clothes look far too new and clean for a character whose lack of care in his appearance is one of Turnbull's main weapons against him. 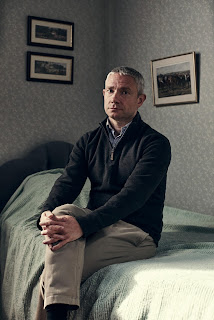 The Outside Dog was, in the 1998 series, the second of the monologues to be written for Julie Walters, but Rochenda Sandall makes the role of Marjory her own. An edgy, jittery woman who has more genuine reasons to be so nervous than are initially apparent: Her obsessive compulsion with cleaning and hygiene is convenient for her husband, who has a new dog he likes to take out on long walks late at night. On certain nights he comes back desperate for sex, and those nights always seem to coincide with the news that a serial killer has murdered his latest victim. This is Talking Heads as thriller, which Nadia Fall's production embraces, ratcheting up the tension and with Sandall throwing a lot of ambiguity into her portrayal of Marjory. Is she operating out of fear from the outset, or is it only at the end that she realises how badly her support of her husband has trapped her? 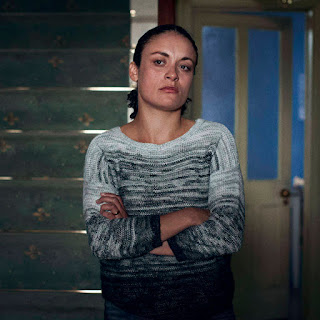 One person who wouldn't be welcome in Marjory's spotless house is tonight's final narrator, waving her cigarette around the house with two inches of ash hanging off it and stumbing around knocking things other. Susan is, of course, the character originally played by Maggie Smith, and it would have been unwise to say the least to try to take on the level of spikiness she brought to the alcoholic vicar's wife. Instead Nicholas Hytner has matched the role with Lesley Manville, who brings a quieter note of sadness to Susan, whose identity has been so subsumed into her husband's job she's become entirely isolated. On the other hand this is one of the pieces with some of the wittiest one-liners, and Susan's cattiness comes as more of a fun surprise from Manville's seemingly subdued performance. Susan's release comes when the judgmental attitude at the local off-licence means she has to look further afield for her two daily bottles of sherry, and winds up having an affair with an Indian shopkeeper half her age. 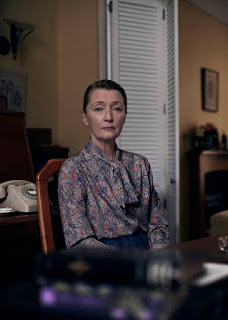 Bennett is the sort of writer you might unthinkingly associate with vicars and church fêtes, but Bed Among the Lentils tells you exactly what he thinks of that sort of cosy Church of England image. One underlying theme of these Talking Heads is that Bennett was clearly hearing a lot of anti-Asian sentiment when he wrote them, as there's a frequent sense of him pushing back against it. This is where the theme takes centre-stage, as Mr Ramesh becomes the one person to proactively try to help Susan combat her alcoholism (she only even finds out her husband and parishioners knew about it after she joins Alcoholics Anonymous, when she discovers that they'd been holding secret prayer meetings about it.) From a modern perspective there's undoubtedly something a bit patronising about Bennett's succession of kindly Asian background characters, but as many of the monologues warn before they start these reflect the attitudes of the time they were written and let's face it, there's 1980s attitudes on race that could have aged a lot worse.

Talking Heads by Alan Bennett is available until June 2021 on BBC iPlayer.