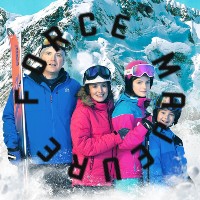 Are steep stages going to be a 2022 theatrical meme? After Spring Awakening's set of steps comes an off-kilter, steeply raked white stage dominating the Donald and Margot Warehouse for Michael Longhurst's production of Force Majeure. The reason for these white expanses is that Tim Price's midlife crisis play, based on a film by Ruben Östlund, takes place at a ski resort in the French Alps, where a Swedish family have decided to take a rare holiday together. Ebba (Lyndsey Marshal) thinks her husband spends too much of his time at work and not enough with their kids, so she's convinced Tomas (Rory Kinnear) to revisit a place he often went to as a child, and try to forge a relationship with his own, increasingly difficult children: Vera (Bo Bragason, alternating with Florence Hunt) is entering her teenage years and has, in a detached way, decided her parents are heading for divorce, while Harry (Oliver Savell, alternating with Henry Hunt) is having an alternately clingy and shouty phase.
The holiday is fractious from the start, but things get worse when there's a false alarm of an avalanche, and Tomas grabs his phone and runs away. Ebba's anger at him seemingly abandoning his family to their fate doesn't get any better when he forcefully argues that he doesn't remember doing it. Behind the slopes, Jon Bausor's set is dominated by a huge photo of a snow-capped mountain - it's more hotel mural than great outdoors, which is appropriate enough as most of the action takes place in the hotel, and the family suite that instead of bringing the quartet together makes them desperate for their own space. 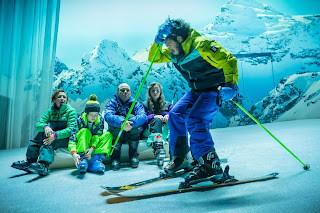 Although entertaining, Force Majeure is an odd play with effective comic and dramatic moments, that never quite strikes a balance between the two. Kinnear seems to alternate comedic and dramatic roles and here for much of the play is back to a kind of comic bafflement he does very well. He and Marshal have played a married couple on stage before, and the brunt of the drama is left to her as Tomas' flight response makes Ebba face a deeper crisis in their marriage that he can't quite recognise is there. 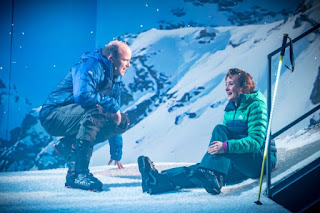 Visually this is a memorable production - you don't tend to see skiing on stage, and although you could argue there's a reason for that (the actors don't always look entirely on-balance on the rake, and the dance/movement sequences during scene changes look particularly wobbly) there are also moments that are cleverly done, especially when the ensemble actually ski across the stage (the family's own trips onto the slopes are done a bit more expressionistically.) I also liked the simple lighting effect (lighting designer is Lucy Carter) that made the elevator look like it was moving. But I do think, for a change, the side Circle seats where I usually sit probably had better sightlines than the ones beneath us - I could see a lot of empty side Stalls seats, and I suspect that's because the rake would obscure a hell of a lot of the view. 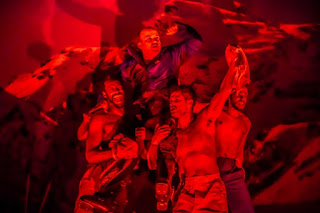 Still, thematically I felt like the play could never decide if it was about the family or a wider crisis of masculinity, and the story is episodic to the point of being fragmented: Charlotte (Nathalie Armin,) a wealthy woman whose open marriage makes Ebba question her own, seems to be a major character only to disappear. More egregiously, after the second act opens with a lengthy diversion about the couple's friends Mats (Sule Rimi) and Jenny (Siena Kelly,) they too end up forgotten until the play's climax. This choppy, almost distracted storytelling means I too was easily distracted (I don't know anything about skiing holidays, do people really go that mad for salad outdoors on top of a frozen mountain?) and the pace feels slightly off: Never boring or overlong, Force Majeure is certainly fun and worth a look, but it also never left me entirely confident that the story knew where it was going.
Force Majeure by Ruben Östlund in a version by Tim Price is booking until the 5th of February at the Donmar Warehouse.
Running time: 2 hours 20 minutes including interval.
Photo credit: Marc Brenner.
Posted by nick730 at 22:58