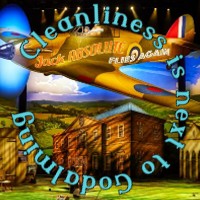 For many of us One Man, Two Guvnors is now remembered as the show that stopped us from ever trusting a theatrical ad-lib again, but there's no denying what a huge international hit Richard Bean's rewrite of Carlo Goldoni's Servant of Two Masters was. So it's not surprising if the National Theatre have tried to recreate the alchemy as Bean, now with one of the original Masters, Oliver Chris, on board as co-writer, takes another 18th century comedy and transposes it to more recent history. This time the source material is perhaps the most enduring Restoration Comedy, Richard Brinsley Sheridan's The Rivals, and while it remains to be seen if its financial success can match its predecessor, Jack Absolute Flies Again is certainly a hit in terms of providing laughs when they're most needed. From a flippant world of fops and wigs the scene moves to men and women in a higher-stakes setting, during the aerial Battle of Britain in 1940.
The country pile of widow Mrs Malaprop (Caroline Quentin) has become an air base for RAF Hurricane pilots. Her niece, Lydia Languish (Natalie Simpson,) has just piloted a new plane to the base, where she's caught the attention of many of the pilots. 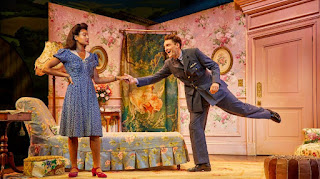 Chief among them is Jack Absolute (Laurie Davidson,) who had a brief fling with Lydia some years before, and wants to woo her properly now. But she's more interested in ground crew Dudley Scunthorpe (Kelvin Fletcher.) Jack's plan to win her back is to disguise himself as Dudley so she'll give him the time of day, before revealing that the man she's fallen for is in fact her ex. Meanwhile Jack is trying to get out of a marriage his father Sir Anthony (Peter Forbes) is trying to arrange for him, not realising that the intended is actually Lydia. 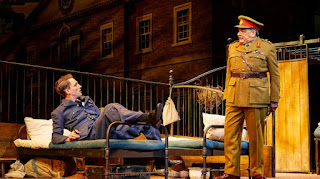 Emily Burns' production has a cartoonish design from Mark Thompson that clues us in to the level of silliness we're operating on here - the structure and tropes of Restoration Comedy mixed with a Carry On sense of humour, although fortunately with a slightly more 21st century sensibility around gender, sexuality, and an awareness of the fact that 18th century class structures haven't changed anywhere near enough: Lydia sees herself as an emancipated woman who cares about the lower classes, and it's a concern exactly as patronising as it sounds; her attraction to Dudley is essentially a fetishisation of the working class, and ignores the fact that he's actually in love with her maid Lucy (who doesn't count as one of the women Lydia wants to help emancipate, because she's got chores for her to do.) 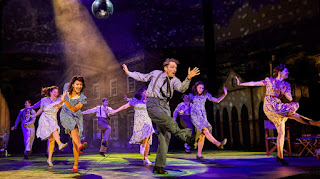 In fact in a generally strong cast it's Kerry Howard's Lucy who's the star here, driving much of the plot with her meddling and deliberately mixing up everyone's love letters. She may be easily dismissed and ignored by the other characters but in a show where the traditional asides to the audience are all present and correct, she's the most genre-aware of them all, regularly describing herself as just a plot device, and leaning into the role with enthusiasm to keep the action going. 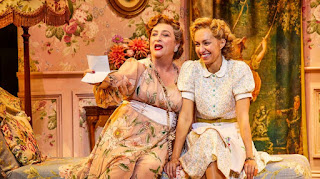 There's plenty of physical comedy - much of it from Jordan Metcalfe's jelly-legged posho Roy - and a couple of dance setpieces, but the real focus of the humour here is in the language. Bean and Chris have used some of the original wordplay Mrs Malaprop gave har name to, while adding a lot more, some a lot cruder than Sheridan could ever have got away with: At one point she refers to "the Cunt of Monte Cristo," and the fact that there was Clematis in the garden is established way too unsubtly, I doubt there was anyone watching who didn't anticipate her Climbing Clitoris. But Quentin has a lot of fun with the gags, and doesn't oversell them, which can kill any malapropism. She's also given a new subplot in which Mrs Malaprop gets a romance of her own with Sir Anthony Absolute. 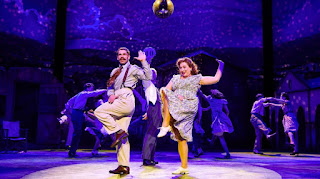 There are a few attempts to stop the play from getting too caught up in jingoistic nostalgia - there's a reminder that the British weren't the only ones fighting, in the form of dimwitted Australian Bob Acres (James Corrigan) and a Sikh pilot (Akshay Sharan,) known as Tony because none of the white pilots can be bothered learning his real name. There's also an acknowledgement that all the fun and games takes place against a backdrop where the characters are often in mortal danger, with a couple of air battles and a surprisingly low-key ending (raucous comedies trying to shoehorn in a tragic, meaningful ending can feel unearned; Jack Absolute Flies Again just about gets away with it.) 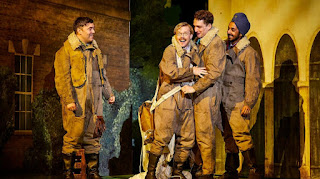 In any case, these suggestions of a more thoughtful side are largely there to stop the play from feeling too much like an insensitive throwback: The main purpose is to get laughs, and there's no shortage of them here. The mix of three different types of humour - the 1775 original, the 1940 setting and the 2022 premiere, that allows both for some coarser comedy and some different satirical takes on the characters - has produced something both steadfastly old-fashioned and completely fresh, and if there's so many gags that not all of them land, the hit rate's good enough to make this a refreshing evening of comedy.
Jack Absolute Flies Again by Richard Bean and Oliver Chris, based on The Rivals by Richard Brinsley Sheridan, is booking until the 3rd of September at the National Theatre's Olivier.
Running time: 2 hours 35 minutes including interval.
Photo credit: Brinkhoff Moegenburg.
Posted by nick730 at 23:17