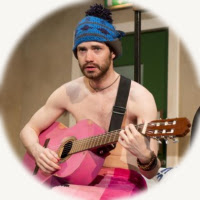 Andy Rush must have really impressed the creatives on The Kitchen Sink - he's barely out of Hello/Goodbye, helmed by that show's director Tamara Harvey, when he crops up in writer Tom Wells' latest play. Watford, where Jumpers for Goalposts premieres for Paines Plough with the intention of subsequently touring, is further than I like to travel for theatre but Wells' past work's been so good I was tempted to make the trip even before other bloggers insisted I must. Set around a gay and lesbian five-a-side football tournament (soccer to Americans and other aliens) it follows a team whose self-deprecating name, Barely Athletic, conceals a rabid desire to win - at least on the part of head coach and team captain Viv (Vivienne Gibbs.) The manager of a local gay pub, Viv has put a team together from a couple of regulars; and as her sister has recently died, she's also recruited as "token straight" her brother-in-law Joe (Matt Sutton,) in the hope that the distraction will help him cope.

Set entirely in the changing room after the six matches that make up the tournament, Wells' trademark comic style with an emotional kick pushes forward the story of two pairs: Viv champions the idea of football as a healing tool for Joe, unwilling to acknowledge the obvious fact that she's the one least able to cope with the loss. But the heart of the play is with Danny (Jamie Samuel) and the shy librarian he's invited to join the team, Luke (Philip Duguid-McQuillan.) For very different reasons both shy away from making a move despite the obvious mutual attraction.

Sitting somewhere between them all is Rush's Beardy Geoff, a busker with an unfortunate tendency to have sex with a member of the rival team just before the game, and an ambition to become a star if he can only find the perfect song to play at the upcoming Hull Pride. Largely a comic character he does serve as confidante to some of the others, and a catalyst to some of the plot's major developments.

Although perhaps not quite as much of an instant classic as The Kitchen Sink this is still a great piece of theatre, Wells once again offering a gentle, highly individual comedy that's celebratory and fun, yet subtly but unmistakably political.

Dealing with the still-present homophobia even in a world where a gay football tournament is unremarkable (Geoff's ubiquitous woolly hat is to cover up a nasty scar from being queer-bashed) as well as a very sensitively handled plotline on how HIV hasn't gone away yet and some young gay men can be complacent about safe sex, Wells tackles heavy subjects in the style of the best kind of sitcom. (I've said before it can only be a matter of time before he's offered the chance to write a TV sitcom, and if he can bring the same kind of heart wrapped up in laughs to a mass audience that can only be a good thing.)

Though four out of five characters are gay this is far from a niche work. It's been 20 years since Jonathan Harvey's Beautiful Thing (I'll be seeing the anniversary production in a couple of weeks) but Wells is the first writer to feel to me like the next generation's Harvey in the way he writes a predominantly gay story that resonates with a mainstream audience: Though their relationship has some grittier truths to navigate, Danny and Luke are successors to Jamie and Ste, no longer having to navigate coming out but still with other issues to deal with. Certainly a Saturday matinee audience in the suburbs with its share of pensioners and families in the stalls responded enthusiastically to their story.

Director James Grieve has pulled together a strong cast and marshals them through the development of identifiable characters with strengths and foibles, in a piece that's as funny as it is, frequently, moving.

Jumpers for Goalposts by Tom Wells is booking until the 20th of April at the Watford Palace Theatre, followed by a tour (dates & venues yet to be confirmed.)