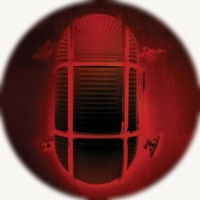 Sound designers often make a huge contribution to a performance's overall effect but they're rarely the instigators of an entire production, as composer and DJ Matthew Herbert is for the latest show in The Shed, The Hush. Unfortunately it doesn't involve floating Gentlemen stealing people's voices, although it does involve the audience losing their shoes - in the interests of not making noise, we're asked to take our shoes off and leave them in a rack at the back of the stage. In a small theatre at the end of a hot day the show threatens to become an assault more on the nose than the ears; on the other hand if you're a theatre usher with a foot fetish, I think I've identified your dream job. Back to the stage though where a space that looks like an anonymous hotel room turns out to be a place called The Hush, where sound is created and listened to.

Herbert has collaborated with Ben Power to create a framework for his sound designs. Tobias Menzies and Susannah Wise play eponymous characters who take turns using the room: Tobias is creating sounds, building an audio story of a busy city street outside a bedroom, in which a woman smokes and types in bed. 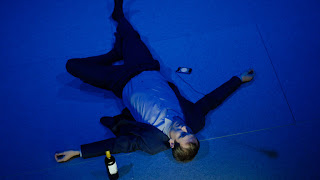 Susannah on the other hand is there to listen, having been left a series of tracks by her (late?) father that bring to life particular memories, some of which she increasingly gets lost in. The two eventually meet, Susannah providing a component in the final version of Tobias' new sound, also seemingly a memory, but one he appears to be recreating for his own benefit. 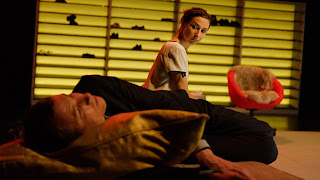 Viewed as a whole it's a rather neat, complete little dramatic structure that's satisfying in its way. Unfortunately actually watching it is not as rewarding an experience, as an hour is a long time to stretch this simple conceit out to, however carefully put together the soundscape is (and some of the audio sequences are really very abrasive.) 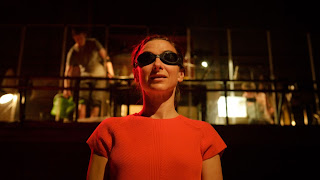 The other two onstage performers are foley artists Barnaby Smyth and Ruth Sullivan, on a balcony above the stage, and how much you get from the show may depend on how fascinating you find foley art. I'm afraid although I think it's clever I don't see what makes so many theatre-makers think it constitutes an evening's entertainment in itself, and in any case the balcony behind a sheet of Plexiglas isn't the clearest place to appreciate how they're working anyway. Given such abstract characters to work with, it's impressive how much emotion and developing story Menzies and Wise manage to invest them with; not enough though, to stop this from being a dull evening that works better in theory than in practice.

The Hush by Matthew Herbert and Ben Power is booking until the 3rd of August at the National Theatre's Shed.