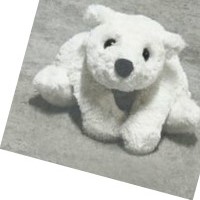 I guess this year's "plays with Fuck in the title" meme has well and truly jumped the shark, because after a couple of strong entries we now get Tanya Ronder's egregious Fuck the Polar Bears at the Bush. A play about the damage done to the environment by everyday energy usage, it makes its points with all the subtlety of an anvil made of shit. Our heroes are Gordon and Serena, a wealthy middle-aged couple and the worst human beings ever to have existed. Gordon (Andrew Whipp) is the new CEO of an energy company that wants to start fracking; he celebrates his promotion by bringing home six Sloppy Giuseppe pizzas he knows his family will barely pick at*. I think we might be meant to infer he's happy to waste food but it was all a bit subtle for me. His big new wage packet means he and his wife can finally sell their enormous mansion, and move into an even more enormous mansion they like better.

Serena (Susan Stanley,) meanwhile, likes to waste energy. Not in a lazy, "she's just got used to leaving things turned on" kind of way, but as a deliberate and aggressive demonstration of entitlement. Their Icelandic au pair Blundhilde (Salóme R. Gunnarsdóttir) is very concerned about energy-saving and recycling, and as a result Serena hates her with every fibre of her being. 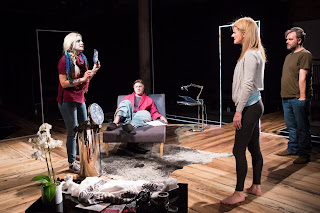 Most of the cast flounder while trying to deal with the awful script and no-dimensional characters; only Jon Foster succeeds in turning his character into anything resembling a real human, as Clarence, Gordon's brother, a painter/decorator and recovering drug addict. I'm not entirely sure what he's even doing in this story, but his attempts to make up for past wrongs by painting Gordon's house for free are repeatedly thrown back in his face. So perhaps it's meant as another reminder that the central couple are such irredeemably terrible people that they deserve to be punished, perhaps by making them watch this play. 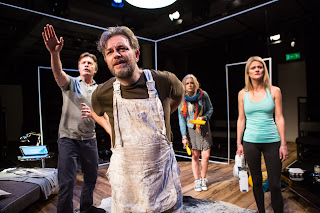 What I shall generously refer to as the plot, revolves around the couple's daughter (Bella Anne Padden, alternating with Eléa Vicas) losing her stuffed toy polar bear IT'S SO BORING. This causes Gordon to immediately go doolally and convince himself the toy has come to life and is shitting in the corner of the room because reasons. OH GOD LET ME OUT IT'S SO BORING. The theme of polar ice caps is referenced at every conceivable point: "Would you like a mint?" "Thank you, oh I see it is a FOX'S GLACIER MINT!!!!!!!!!" (Other mints are available.) "I have a pet hamster, his name is Iggy, it's short for IGLOO!!!!!?!!!" After an hour and a half WHEN WILL THIS END IT'S SO BORING of not giving a shit, Gordon and Serena suddenly have a candlelit heart-to-heart about wanting to save the environment, but eventually conclude that, nah, they can't be arsed. They'll just get their 8-year-old trained in using a rifle so she stands a better chance of surviving the Apocalypse. No, really, this is where we're going with this. IT'S STILL BORING THOUGH.

Did I mention the couple lock their daughter in a cupboard when she's been naughty? This isn't considered a point worthy of much exploration. 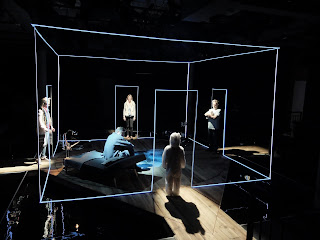 Hey, Chiara Stephenson's set design is genuinely very good though. Although it does include a revolve which adds little or nothing to Caroline Byrne's production, which doesn't strike me as the best use of energy ever. But if we'd just popped in, looked at the set and gone home this would have been a really successful evening. Instead we have the couple's hour and a half of selfishness followed by ten minutes of angst, and eventually Serena says "Let me just play devil's advocate for a minute." NO, IT ISN'T PLAYING DEVIL'S ADVOCATE WHEN YOU'RE ARGUING A POINT YOU'VE BEEN ENTHUSIASTICALLY EMBRACING FOR THE ENTIRE PLAY UP TO NOW. Actually my immediate reaction was NO, DON'T PLAY DEVIL'S ADVOCATE, THAT'LL ONLY MAKE THIS PLAY GO ON LONGER but then again that was my reaction to everything anyone said for the whole evening. Badly written, directed and acted, I can't imagine why anyone would want to stage this terrible play by the partner of one of the most influential men in British theatre.

Fuck the Polar Bears by Tanya Ronder is booking until the 24th of October at the Bush Theatre.

*Even if you do have enough people round at your house that you need to order lots of pizzas, who gets six the same flavour? There's honestly so much about this play that makes me wonder if Ronder has ever met another human being before.
Posted by nick730 at 22:20