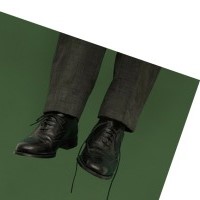 The Royal Court ended its last season Downstairs with a play about hanging; it begins its autumn season with another one. But where debbie tucker green imagined a Britain where capital punishment is still in place, Martin McDonagh's Hangmen takes us to the day after its abolition. Most of the action takes place in a small Oldham pub run by Alice (Sally Rogers) and her husband Harry (David Morrissey.) But up until yesterday Harry's main job was as the country's second-best hangman, after the legendary Albert Pierrepoint. Any mention of Pierrepoint is taboo in this pub though, as instead of notoriety, Harry's job has gained him a macabre kind of celebrity, and he's been happy to capitalise on it for status. With the abolition of hanging in the news, a reporter from the local paper wants Harry's side of the story, and while he pretends to keep a dignified silence, he can't wait to hold court again.

But there's more than one newcomer in the pub; and the mysterious young Southerner Mooney (Johnny Flynn adding "nasal Essex whine" to his seemingly endless supply of annoying voices) has been observing the family, and getting friendly with their awkward teenage daughter Shirley (Brownyn James.) 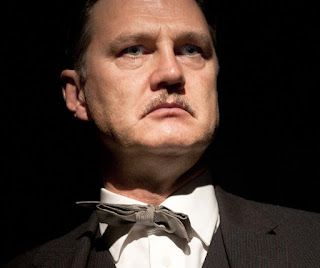 McDonagh is a master of black comedy, and he displays it in an opening scene that takes place a couple of years before the main events, at the farcical execution of Hennessy (Josef Davies,) who protests his innocence throughout. It helps kick off Matthew Dunster's production with energy and the dark irreverence that's going to continue to be a feature; but it also becomes a critical plot point as it seems he may have been telling the truth about not being guilty. Things take an even darker turn when Harry's former assistant Syd (Reece Shearsmith) arrives with a warning that the real killer might be back in action - and his description matches a certain newcomer. 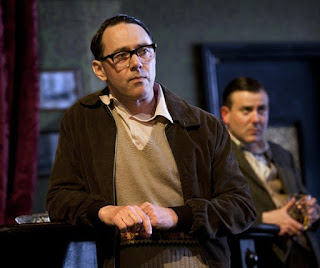 The show starts with a couple of coups de théâtre courtesy of Anna Fleischle's set, which has the odd surprise left for later in the play as well. The visuals remain atmospheric throughout*, nicely balancing out the often broad humour of the dialogue. McDonagh quickly establishes the personalities of the regulars, from the local police inspector (Ralph Ineson) who despite his position still defers to the famous hangman, to deaf old Arthur (Simon Rouse,) whose constant stating of the obvious gets turned into a great running gag. 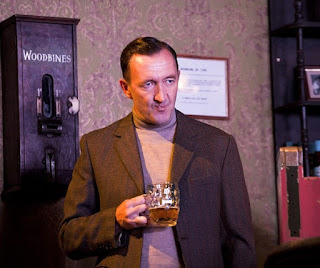 McDonagh's ability to build menace through comedy is in evidence in the first act; it's clear all won't turn out to be as it seems, but the second act takes these plot twists into yet more unexpected directions. Helped by a brief, borderline surreal appearance by a figure from Harry's past (John Hodgkinson,) the play's final hour speeds by. I was a bit disappointed that one major mystery is left unsolved - the characters even comment on this - and I still don't enjoy watching Flynn act, but these quibbles aside Hangmen is as good as I'd hoped it would be, and shows McDonagh's pitch-dark comedy is as sharp as ever.

Hangmen by Martin McDonagh is booking until the 10th of October at the Royal Court's Jerwood Theatre Downstairs (returns and day seats only.)

*inevitably the sight of Shearsmith peering through a window in the pouring rain brings back memories of "The Twelve Days of Christine"
Posted by nick730 at 22:51